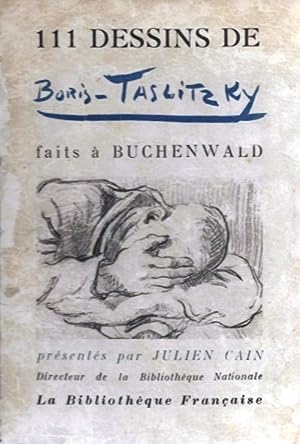 1st edition. Loose sheets as issued, in later custom clamshell box with original portfolio cover mounted on front. 4to. One of 3200 Numbered Copies. 111 plates of drawings, the first 100 relating to Buchenwald, plus 6 portraits, and 5 aquarelles in color. Captions in French, English, and Russian. 26 cm. Title page and preface in French. Boris Taslitzky began painting at the age of fifteen and attended the academie Montparnasse and the École des Beaux-Arts in Paris between 1925 and 1933. In 1933, he joined the Association of Revolutionary Writers and Artists (A. É. AR) where he became general secretary of the section of Painters and Sculptors, and then in 1935, he joined the Communist Party. In 1936, during the presentation of Quatorze Juillet, by Romain Rolland , Taslitzky participated in the exhibition that brought together Picasso , Léger , Matisse , Braque , Jean Lurcat , Laurens and Pinion in the lobby of the Alhambra Theatre. Taslitzky was captured in June 1940, escaped in August and joined the Resistance. He was arrested again in November 1941, sentenced to two years in prison, and then on July 31, 1944 was deported to Buchenwald , where he manages to make some two hundred drawings showing life in the camps. "If I go to hell, I will make sketches. Besides, I have experience, I've been there and I've drawn! . ", he later said. His mother died at Auschwitz . In 1946, Taslitzky exhibited his works which were inspired by the Resistance and Deportation, winning the Prix Blumenthal. He was later awarded the Military Cross and Military Medal and in 1997 he received the insignia of Chevalier of the Legion of Honour under the Resistance and Deportation. He was both witness and actor in the story of French Resistance and the Holocaust. SUBJECT(S) : Concentration camps -- Pictorial works. Buchenwald (Camp de) Guerre mondiale 1939-1945. Prisonniers et déportés. Camps allemands. Buchenwald. Album. Concentration camps. Pictorial works. Wear to original illustrated cover, which has been mounted on front of box, but no damage to illustration. Moving, early, and important. (holo2-125-44) xx HOLO12, art2 , 208-210. N° de réf. du libraire 36072

Dan Wyman Books is the largest Jewish Antiquarian bookstore in New York, and a leading dealer worldwide. Please stop by when you are in town. Open by appointment most days, but closed on Jewish Holidays. Please visit our homepage at www.DanWymanBooks.com Please contact us with your needs or if you have books to sell. We consistently out-bid our competitors and we make housecalls to buy books!


Receive free of charge our monthly book list of unusual out-of-print Jewish,
titles in your e-mail box--days before they are posted on line. E-mail us for
details (no purchase necessary).

All titles are 100% returnable for any reason. U.S. Shipping is free. We accept
payment by check or major credit card (MC/VISA, AMEX, Discover), PayPal or Cash.
Please call or e-mail to hold an item. We reciprocate standard trade terms.