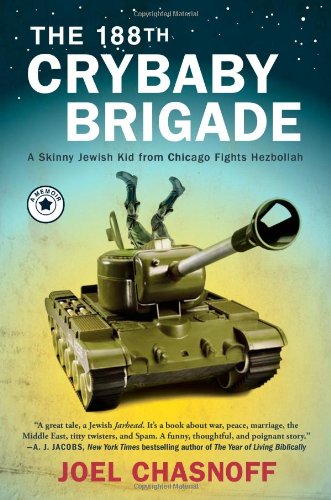 The Russian is poking my balls.

I’ve been trapped in this dank examination room since nine o’clock. In five minutes it’ll be nine-thirty, and I feel like a dope, what with my boxer shorts at my ankles and my dick in my hand so the Russian can get a good view.

It’s Tuesday morning, the eighth of July, and I’m at the Israel Defense Forces Induction Center outside Tel Aviv. I arrived in Israel three weeks ago. Today is my first pre-army checkup.

The Russian says something in Hebrew, but I can’t understand him through his thick Russian accent.

He switches to broken English. “You pee-nus ? hurt you?”

The Russian scoots forward on his knees. He’s about sixty years old and bald. Even though he’s a doctor, he’s dressed like a plumber—plaid short-sleeve shirt, dirty jeans. I imagine that back in Russia he was a brain surgeon. Now he checks gonads for the Israeli Army.

I lift my penis until it’s flat against my stomach.

He squeezes my testicles gently as if trying to pick the perfect peach. His forehead is inches from my belly. I’m a hiccup away from a dishonorable discharge.

He pulls his enormous Clark Kent eyeglasses off the crown of his head, presses them onto his nose, and jots a note on his clipboard, while I, in the meantime, try to think about anything in the world besides how much I hate holding myself while a nearsighted, balding Russian takes notes.

I try to name every team in the National League.

My visit to the Induction Center began at eight this morning, when I showed up at the front gate without so much as an appointment. “I can’t let you in without draft orders,” said the soldier guarding the entrance. He was a chubby kid, with blond hair, sunglasses, and an Uzi. He stood in a white booth next to a chain-link fence. A hundred yards behind him were the three redbrick buildings that made up the Induction Center com-
plex.

I explained in Hebrew that because I’d immigrated to Israel less than a month ago, I hadn’t yet received my draft orders. “But here,” I said, pulling out my brand-new national ID card. “I’m Israeli.”

The soldier scrutinized my ID card. Then he looked at me, then back at the card, and then back to me. “Where’re you from?” he asked suspiciously.

“The United States,” I said.

“I’ve driven past his house,” I said.

He handed me my ID. “Straight ahead. Inside the middle building.”

The Russian grabs the edge of his desk and hoists himself to his feet. “Bend over,” he orders. He must see the look of horror that flashes across my face, because he quickly adds, “You can put on your pants first.”

I bend over and touch my toes. The Russian taps my spine. “Your back’s crooked,” he says.

“It is?” I shout through my legs, trying to sound surprised.

“You ever have back pain?” he asks.

The way I see it, I have two options. Option One: tell the truth, that is, confess to the Russian doctor that I was diagnosed with mild scoliosis when I was nine and that, three months ago, during a pickup basketball game at the JCC, I collapsed to the gymnasium floor with back pain so severe it took the paramedics thirty minutes just to roll me onto the stretcher. I would then have no choice but to inform the Russian that my personal physician in the States, Dr. Zielinski, had advised me not to enlist in the Israeli Army—not that Zielinski had thought the IDF would take me. “I can’t speak for Israel,” he’d said, “but a back as messed up as yours would never be allowed in the Marine Corps.”

The problem with Option One is that if the Russian finds out about my back, he will assign me to a noncombat desk job. But I don’t want a desk job. I didn’t immigrate to Israel to type memos or change tires. I’m here because since I was seventeen years old, I’ve dreamed of jumping out of planes, charging up mountains, and hiking the desert with a pack on my back as a combat soldier in the Israeli Army. For this reason, I choose Op-
tion Two:

He massages the glands in my neck. He studies the soles of my feet like they’re a map of the sunken treasure. He sticks an icy stethoscope into my chest and orders me to breathe.

I sit. He sits across from me at his desk. “Tell me about your family,” the Russian says. “Any medical history I should know about?”

I shake my head.

My mother has multiple sclerosis, walks with a cane, and at times is confined to a wheelchair. “Nope.”

My dad’s back is worse than mine—so bad that he’s had surgery on it twice. “Nothing comes to mind.”

One of my younger brothers has Crohn’s disease. The other had croup, two hernias, and an undescended testicle. “Not that I can think of.”

The Russian scribbles on my chart. “You’re going combat,” he says.

I pump my fist and smile. My scoliosis has been overlooked! My feet are arched! My balls are worthy of a medal!

I skip to the door. “Chasnoff!” the Russian barks.

“Don’t do anything stupid,” he says.

I am not a professional bookseller. I am disposing my personal library of signed first editions and autographs, collected as a hobby over the past 55 years.


Shipping costs are based on books weighing 2.2 LB, or 1 KG. If your book order is heavy or over-sized, we may request extra shipping. Also: overseas shipments of books valued over $100 may require request for extra postage since they will be shipped by Priority Mail which has tracking. Also: Please be patient since shipping times given are estimates only and delays in postal system (and customs for international orders) are possible--times given are not guaranteed delivery times. Also note: Do no accept or ship any item ordered overseas that is valued under $15.