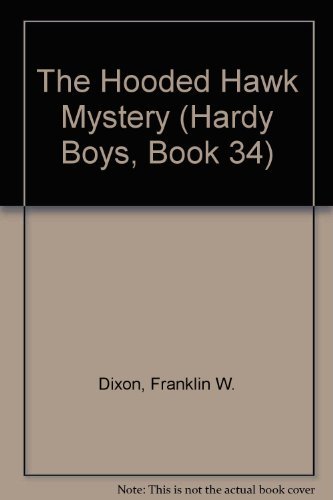 The young detectives receive a trained peregrine falcon as a gift that involves them in an exciting mystery. Imagine their astonishment when the swift-flying falcon brings down a homing pigeon carrying two precious rubies! Startling events that ensue indicate the gems are a ransom that has been paid for the release of a kidnapped student from India, who had come to the United States to complete his education. But Tava, the son of a wealthy industrialist, is still being held captive. Hoping to find a clue to Tava’s whereabouts, the Hardys try to track down the owner of the ruby-bearing pigeon. Their every move, however, is thwarted by the dangerous criminals not only involved in the kidnapping, but also in the large-scale smuggling of aliens from India to the United States. How Frank and Joe eventually outwit their adversaries climaxes this thrill-packed mystery adventure.

Franklin W. Dixon is a pen name used by a variety of authors writing for the classic series, The Hardy Boys. The first and most well-known "Franklin W. Dixon" was Leslie McFarlane, a Canadian author who contributed 19 of the first 25 books in the series. Other writers who have adopted the pseudonym include Christopher Lampton, John Button, Amy McFarlane, and Harriet Stratemeyer Adams.

Description du livre Paperback. Etat : Good. All orders are dispatched the following working day from our UK warehouse. Established in 2004, we have over 500,000 books in stock. No quibble refund if not completely satisfied. N° de réf. du vendeur mon0005686612

Description du livre Paperback. Etat : Very Good. The Hooded Hawk Mystery (Hardy Boys Mystery Stories) This book is in very good condition and will be shipped within 24 hours of ordering. The cover may have some limited signs of wear but the pages are clean, intact and the spine remains undamaged. This book has clearly been well maintained and looked after thus far. Money back guarantee if you are not satisfied. See all our books here, order more than 1 book and get discounted shipping. . N° de réf. du vendeur 7719-9780006923756

Description du livre Paperback. Etat : Very Good. Shipped within 24 hours from our UK warehouse. Clean, undamaged book with no damage to pages and minimal wear to the cover. Spine still tight, in very good condition. Remember if you are not happy, you are covered by our 100% money back guarantee. N° de réf. du vendeur 6545-9780006923756