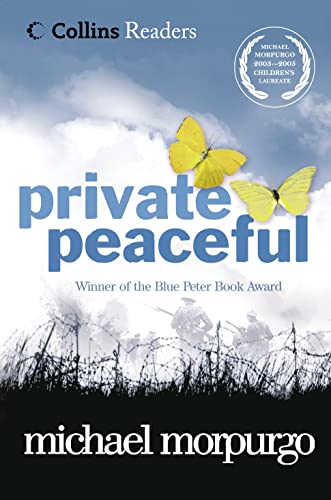 Told from the viewpoint of Tommy Peaceful, this cleverly written story takes a poignant look at the First World War from the view point of a child. Written by Children's Laureate Michael Morpurgo, this beautifully written novel, contrasts greatly with the bittersweet childhood memories described amidst the backdrop of a horrific war. Private Peaceful captures the memories of a young First World War soldier awaiting the firing squad at dawn. From his early childhood adventures in rural Devon to the battles and injustices of war that brought him to the Front Line, Private Tommo Peaceful spends these lonely hours re-living his short but vivid past. A beautifully written novel, which contrasts bittersweet childhood memories with the horrors of war. Told in the first person it alternates between past and present, creating both humour and heartache and building tension for its dramatic and thought-provoking conclusion

A BBC Radio 4 dramatisation of the powerful novel set in the First World War, from the author of War Horse.

This is the story of Thomas ‘Tommo’ Peaceful, a young soldier who finds himself in Belgium, in the trenches of the First World War, with his brother Charlie. It is also the story of Tommo’s life, growing up in Devon with his brothers, and of his love for Molly, the beautiful girl he met on his first day at school.

As the story unfolds, from past to present, so approaches the hour when Tommo and Charlie will be separated for ever. The horrors of the First World War, and the injustice meted out to the soldiers who fought in it, are movingly described.

Recorded on location Iddesleigh, the Devon village where the book is set, this radio dramatisation features among its cast Paul Chequer, Nicholas Lyndhurst and author Michael Morpurgo himself.

Private Peaceful: Show your students how much they can love reading with this poignant story of the First World War from Children's Laureate Michael Morpurgo (Collins Readers)

Description du livre Paperback. Etat : Very Good. The book has been read, but is in excellent condition. Pages are intact and not marred by notes or highlighting. The spine remains undamaged. N° de réf. du vendeur GOR001259403

Description du livre Hardcover. Etat : Good. A few small marks or stains to the page edges/pages . A tan to the page edges/pages . Minor shelf wear Good condition is defined as: a copy that has been read but remains in clean condition. All of the pages are intact and the cover is intact and the spine may show signs of wear. The book may have minor markings which are not specifically mentioned. Most items will be dispatched the same or the next working day. N° de réf. du vendeur wbb0019473948