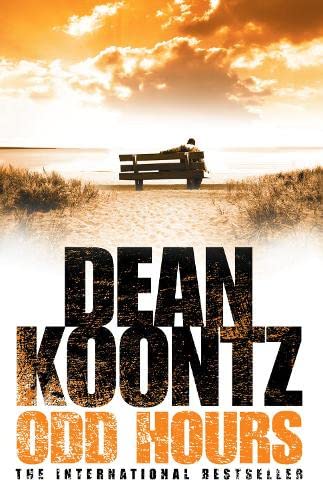 It’s only life. We all get through it.

Not all of us complete the journey in the same condition. Along the way, some lose their legs or eyes in accidents or altercations, while others skate through the years with nothing worse to worry about than an occasional bad-hair day.

I still possessed both legs and both eyes, and even my hair looked all right when I rose that Wednesday morning in late January. If I returned to bed sixteen hours later, having lost all of my hair but nothing else, I would consider the day a triumph. Even minus a few teeth, I’d call it a triumph.

When I raised the window shades in my bedroom, the cocooned sky was gray and swollen, windless and still, but pregnant with a promise of change.

Overnight, according to the radio, an airliner had crashed in Ohio. Hundreds perished. The sole survivor, a ten-month-old child, had been found upright and unscathed in a battered seat that stood in a field of scorched and twisted debris.

Throughout the morning, under the expectant sky, low sluggish waves exhausted themselves on the shore. The Pacific was gray and awash with inky shadows, as if sinuous sea beasts of fantastical form swam just below the surface.

During the night, I had twice awakened from a dream in which the tide flowed red and the sea throbbed with a terrible light.

As nightmares go, I’m sure you’ve had worse. The problem is that a few of my dreams have come true, and people have died.

While I prepared breakfast for my employer, the kitchen radio brought news that the jihadists who had the previous day seized an ocean liner in the Mediterranean were now beheading passengers.

Years ago I stopped watching news programs on television. I can tolerate words and the knowledge they impart, but the images undo me.

Because he was an insomniac who went to bed at dawn, Hutch ate breakfast at noon. He paid me well, and he was kind, so I cooked to his schedule without complaint.

Hutch took his meals in the dining room, where the draperies were always closed. Not one bright sliver of any windowpane remained exposed.

He often enjoyed a film while he ate, lingering over coffee until the credits rolled. That day, rather than cable news, he watched Carole Lombard and John Barrymore in Twentieth Century.

Eighty-eight years old, born in the era of silent films, when Lillian Gish and Rudolph Valentino were stars, and having later been a successful actor, Hutch thought less in words than in images, and he dwelt in fantasy.

Beside his plate stood a bottle of Purell sanitizing gel. He lavished it on his hands not only before and after eating, but also at least twice during a meal.

Like most Americans in the first decade of the new century, Hutch feared everything except what he ought to fear.

When TV-news programs ran out of stories about drunk, drug-addled, murderous, and otherwise crazed celebrities—which happened perhaps twice a year—they sometimes filled the brief gap with a sensationalistic piece on that rare flesh-eating bacteria.

Consequently, Hutch feared contracting the ravenous germ. From time to time, like a dour character in a tale by Poe, he huddled in his lamplit study, brooding about his fate, about the fragility of his flesh, about the insatiable appetite of his microscopic foe.

He especially dreaded that his nose might be eaten away.

Long ago, his face had been famous. Although time had disguised him, he still took pride in his appearance.

I had seen a few of Lawrence Hutchison’s movies from the 1940s and ’50s. I liked them. He’d been a commanding presence on screen.

Because he had not appeared on camera for five decades, Hutch was less known for his acting than for his children’s books about a swashbuckling rabbit named Nibbles. Unlike his creator, Nibbles was fearless.

Film money, book royalties, and a habit of regarding investment opportunities with paranoid suspicion had left Hutch financially secure in his old age. Nevertheless, he worried that an explosive rise in the price of oil or a total collapse in the price of oil would lead to a worldwide financial crisis that would leave him penniless.

His house faced the boardwalk, the beach, the ocean. Surf broke less than a minute’s stroll from his front door.

Over the years, he had come to fear the sea. He could not bear to sleep on the west side of the house, where he might hear the waves crawling along the shore.

Therefore, I was quartered in the ocean-facing master suite at the front of the house. He slept in a guest room at the back.

Within a day of arriving in Magic Beach, more than a month previous to the red-tide dream, I had taken a job as Hutch’s cook, doubling as his chauffeur on those infrequent occasions when he wanted to go out.

My experience at the Pico Mundo Grill served me well. If you can make hash browns that wring a flood from salivary glands, fry bacon to the crispness of a cracker without parching it, and make pancakes as rich as pudding yet so fluffy they seem to be at risk of floating off the plate, you will always find work.

At four-thirty that afternoon in late January, when I stepped into the parlor with Boo, my dog, Hutch was in his favorite armchair, scowling at the television, which he had muted.

His deep and rounded voice rolled an ominous note into every syllable: “Mars is warming.”

“It’s warming at the same rate as the earth.”

“Were you planning to move to Mars to escape global warming?”

He indicated the silenced anchorman on the TV. “This means the sun is the cause of both, and nothing can be done about it. Nothing.”

He fixed me with that luminous gray-eyed stare that conveyed implacable determination when he had played crusading district attorneys and courageous military officers.

“Sometimes, young man, I think you may be from beyond Mars.”

“Nowhere more exotic than Pico Mundo, California. If you won’t need me for a while, sir, I thought I’d go out for a walk.”

Hutch rose to his feet. He was tall and lean. He kept his chin lifted but craned his head forward as does a man squinting to sharpen his vision, which might have been a habit that he developed in the years before he had his cataracts removed.

“Go out?” He frowned as he approached. “Dressed like that?”

I was wearing sneakers, jeans, and a sweatshirt.

He was not troubled by arthritis and remained graceful for his age. Yet he moved with precision and caution, as though expecting to fracture something.

Not for the first time, he reminded me of a great blue heron stalking tide pools.

“You should put on a jacket. You’ll get pneumonia.”

“It’s not that chilly today,” I assured him.

“Not this young person, sir. I’ve got every reason to be astonished that I’m not already permanently horizontal.”

Indicating the words mystery train on my sweatshirt, he asked, “What’s that supposed to mean?”

“I have never been in a thrift shop.”

“You haven’t missed much.”

“Do only very poor people shop there or is the criteria merely thriftiness?”

“They welcome all economic classes, sir.”

“Then I should go one day soon. Make an adventure of it.”

“You won’t find a genie in a bottle,” I said, referring to his film The Antique Shop.

“No doubt you’re too modern to believe in genies and such. How do you get through life when you’ve nothing to believe in?”

Lawrence Hutchison was less interested in my beliefs than in the sound of his well-trained voice. “I keep an open mind regarding all things supernatural.”

I found his self-absorption endearing. Besides, if he were to have been curious about me, I would have had a more difficult time keeping all my secrets.

He said, “My friend Adrian White was married to a fortune-teller who called herself Portentia.”

I traded anecdotes with him: “This girl I used to know, Stormy Llewellyn—at the carnival, we got a card from a fortune-telling machine called Gypsy Mummy.”

“Portentia used a crystal ball and prattled a lot of mumbo jumbo, but she was the real thing. Adrian adored her.”

“The card said Stormy and I would be together forever. But it didn’t turn out that way.”
From the Hardcover edition.

Only a handful of fictional characters are recognized by first name alone. Dean Koontz’s Odd Thomas is one of those rare literary heroes who have come alive in readers’ imaginations as he explores the greatest mysteries of this world and the next with his inimitable wit, heart, and quiet gallantry. Now Koontz follows Odd as he is irresistibly drawn onward to a destiny he cannot imagine and to undreamed of places where the perils he will face and the stakes for which he fights will eclipse all that he has known.

The legend began in the obscure little town of Pico Mundo. A fry cook named Odd was rumored to have the extraordinary ability to communicate with the dead. Through tragedy and triumph, exhilaration and heartbreak, word of Odd Thomas’s gifts filtered far beyond Pico Mundo, attracting unforgettable new friends—and enemies of implacable evil. With great gifts comes the responsibility to meet great challenges. But no mere human being was ever meant to face the darkness that now stalks the world—not even one as oddly special as Odd Thomas.

After grappling with the very essence of reality itself, after finding the veil that separates him from his soul mate, Stormy Llewellyn, tantalizingly thin yet impenetrable, Odd longed only to return to a life of quiet anonymity with his two otherworldly sidekicks—his dog Boo and a new companion, one of the few who might rival his old pal Elvis. But a true hero, however humble, must persevere. Haunted by dreams of an all-encompassing red tide, Odd is pulled inexorably to the sea, to a small California coastal town where nothing is as it seems. Now the forces arrayed against him have both official sanction and an infinitely more sinister authority…and in this dark night of the soul dawn will come only after the most shattering revelations of all.

Burnishing Dean Koontz’s stature as a master of suspense and one of our most innovative and gifted storytellers, Odd Hours illuminates a legacy of mystery and hope that will shine on long after the final page.