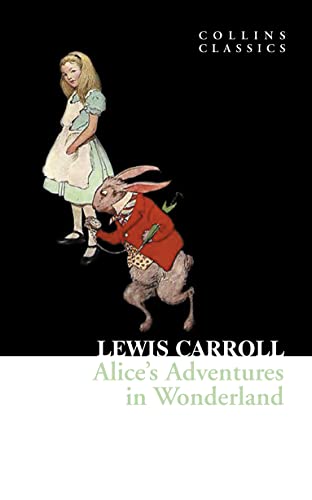 “This year marks the 150th anniversary of Lewis Carroll’s beloved classic, Alice’s Adventures in Wonderland. Commemorate the occasion with a deluxe hardcover edition of the tale from Puffin Books, available Oct. 27. The new book is re-illustrated with vibrant, whimsical designs by Anna Bond of Rifle Paper Co., for a one-of-a-kind look at Alice’s imaginative journey.”—American Profile
From the Hardcover edition.

Description du livre Paperback. Etat : New. Reprint. Language: English. Brand new Book. HarperCollins is proud to present its range of best-loved, essential classics. 'Alice was beginning to get very tired of sitting by her sister on the bank, and of having nothing to do: once or twice she had peeped into the book her sister was reading, but it had no pictures or conversations in it, "and what is the use of a book," thought Alice, "without pictures or conversations?"' So begins the tale of Alice, who follows a curious White Rabbit down a hole and falls into Wonderland, a fantastical place where nothing is quite as it seems: animals talk, nonsensical characters confuse, Mad Hatters throw tea parties and the Queen plays croquet. Alice's attempts to find her way home become increasingly bizarre, infuriating and amazing in turn. A beloved classic, Alice's Adventures in Wonderland has continued to delight readers, young and old, for over 150 years. N° de réf. du vendeur AAZ9780007350827