Kellerman, Faye The Theory of Death

The Theory of Death 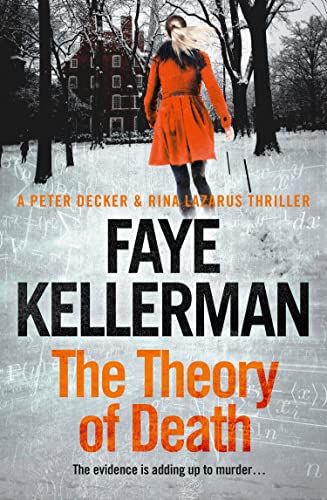 A classic novel by Faye Kellerman.

New York Times bestselling author Faye Kellerman's beloved Decker and Lazarus have settled into life in quiet upstate New York, but they soon find themselves entangled in a case of underworld crime and calculating murderers

It has been almost a year since Greenbury's last murder. Peter Decker, a former Lieutenant for LAPD, has enjoyed the peace and slow pace of his new job with the sleepy upstate police department. The work has kept him engaged but without much stress. All that changes when he receives a phone call from his captain, Mike Radar.

A male body, nude and nameless, is found deep within the local woods. It appears to be a suicide—single shot to the head, gun by his side—but until the coroner makes the final determination, Decker must treat the scene as a suspicious crime. The first thing he must do is identify the body—no easy task because of the small size of the department and lack of personal effects found with the body. But then Decker gets lucky. Out of the blue, Tyler McAdams, a former Greenbury detective and now a first-year law student, calls Decker up, asking him for free room and board while he studies for first-term finals. Of course, once McAdams hears about the intriguing case, his attentions shift from statutes to corpses.

And when the body is finally identified, Decker and McAdams must penetrate into indecipherable upper echelons of mathematics and mathematical prodigies at Kneed Loft College. It turns out to be a dangerous sphere of scheming academics, secret cyphers, and hidden corruption where even harmless nerds can morph into cold, calculating geniuses. Decker and McAdams will have to employ all of their wits and gray matter to penetrate enigmatic formulas and codes to solve a dark, twisted tale created by depraved and evil masterminds.

Former LAPD lieutenant Peter Decker is relishing the quiet and slow pace of his new job with the Greenbury police department. The work is low stress and engaging, and it’s been almost a year since the last murder in this sleepy upstate New York town.

Then the body of a nude man is found deep within the woods, shattering Decker’s peace. The death appears to be a suicide—a single shot to the head, the gun by his side. But until the coroner’s ruling, the scene must be treated as a suspicious crime. Without any personal effects near the body, Decker must dig to uncover his identity, a task made difficult by the department’s tight budget and limited personnel. Luckily, Decker gets some unexpected help when his friend and former Greenbury colleague Tyler McAdams calls, looking for a quiet place to study for his law finals.

The investigation takes Decker and McAdams to Kneed Loft College, where they must penetrate the indecipherable upper echelons of mathematics and mathematical prodigies. Beneath the school’s rarified atmosphere they discover a sphere of scheming academics, hidden cyphers—and most dangerous of all—a realm of underworld crime that transforms harmless nerds into cold, calculating evil geniuses. It will take all of Decker’s experience and McAdams’s brains to penetrate enigmatic formulas and codes and solve a dark, twisted crime devised by some brilliant and depraved masterminds.

Description du livre Harper. Paperback. Etat : Good. A copy that has been read, but remains in clean condition. All pages are intact, and the cover is intact. The spine may show signs of wear. Pages can include limited notes and highlighting, and the copy can include previous owner inscriptions. At ThriftBooks, our motto is: Read More, Spend Less. N° de réf. du vendeur G0008135282I3N00

Description du livre HarperCollins 18/02/2016, 2016. Etat : Good. Will be shipped promptly from UK warehouse. Book is in good condition with no missing pages, no damage or soiling and tight spine. There may be some dog-eared pages showing previous use but overall a great book. N° de réf. du vendeur 9053-9780008135287

Description du livre -. Paperback. Etat : Very Good. The Theory of Death (Peter Decker and Rina Lazarus Crime Thrillers) This book is in very good condition and will be shipped within 24 hours of ordering. The cover may have some limited signs of wear but the pages are clean, intact and the spine remains undamaged. This book has clearly been well maintained and looked after thus far. Money back guarantee if you are not satisfied. See all our books here, order more than 1 book and get discounted shipping. N° de réf. du vendeur 7719-9780008135287

Description du livre Etat : Good. Ships from the UK. Shows some signs of wear, and may have some markings on the inside. N° de réf. du vendeur GRP92140031