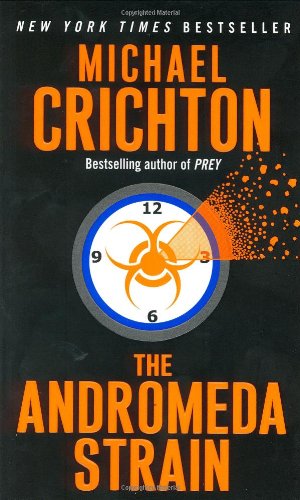 Five prominent biophysicists give the United States government an urgent warning: sterilisation procedures for returning space probes may be inadequate to guarantee uncontaminated re-entry to the atmosphere.
Two years later, Project Scoop sends seventeen satellites into the fringes of space in order to 'collect organisms and dust for study.'
Then a probe satellite falls to earth, landing in a desolate area of northeastern Arizona. In the nearby town of Piedmont, bodies lie heaped and flung across the ground, faces locked in frozen surprise.
The terror has begun...
'He had me convinced it was all really happening'
Christopher Lehmann-Haupt, NEW YORK TIMES

'Science fiction, which once frightened because it seemed so far out, now frightens because it seems so near. The Andromeda Strain is as matter-of-fact as the skull-and-crossbones instructions on a bottle of poison - and just as chillingly effective' LIFE

'Terrifying... One of the most important novels of the year'
LIBRARY JOURNAL

Michael Crichton has sold over 200 million books, which have been translated into thirty-eight languages; thirteen of his books have been made into films. Also known as a filmmaker and the creator of ER, he remains the only writer to have had the number one book, movie, and TV show simultaneously. At the time of his death in 2008, Crichton was well into the writing of Micro; Richard Preston was selected to complete the novel.

Richard Preston is the internationally bestselling author of eight books, including The Hot Zone and The Wild Trees. He is a regular contributor to The New Yorker. He lives with his wife and three children near Princeton, New Jersey.