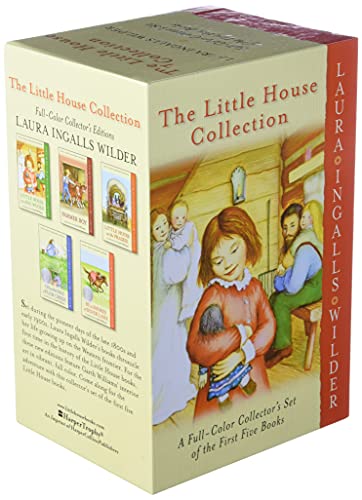 The books in the timeless Little House series tell the story of Laura Ingalls Wilder’s real childhood as an American pioneer and are cherished by readers of all generations. They offer a unique glimpse into life on the American frontier and tell the heartwarming, unforgettable story of a loving family.

Little House in the Big Woods

Wolves and panthers and bears roam the deep Wisconsin woods in the 1870s. In those same woods, Laura lives with Pa and Ma, and her sisters, Mary and Baby Carrie, in a snug little house built of logs. Pa hunts and traps. Ma makes her own cheese and butter. All night long, the wind howls lonesomely, but Pa plays the fiddle and sings, keeping the family safe and cozy.

As Laura Ingalls is growing up in a little house in Kansas, Almanzo Wilder lives on a big farm in New York. He and his brothers and sisters work hard from dawn to supper to help keep their family farm running. Almanzo wishes for just one thing—his very own horse—but he must prove that he is ready for such a big responsibility.

Little House on the Prairie

Pa Ingalls decides to sell the little log house, and the family sets out for Indian country! They travel from Wisconsin to Kansas, and there, finally, Pa builds their little house on the prairie. Sometimes farm life is difficult, even dangerous, but Laura and her family are kept busy and are happy with the promise of their new life on the prairie.

On the Banks of Plum Creek

Laura's family's first home in Minnesota is made of sod, but Pa builds a clean new house made of sawed lumber beside Plum Creek. The money for materials will come from their first wheat crop. Then, just before the wheat is ready to harvest, a strange glittering cloud fills the sky, blocking out the sun. Soon millions of grasshoppers cover the field and everything on the farm. In a week's time, there is no wheat crop left at all.

By the Shores of Silver Lake

Pa Ingalls heads west to the unsettled wilderness of the Dakota Territory. When Ma, Mary, Laura, Carrie, and baby Grace join him, they become the first settlers in the town of De Smet. And Pa begins work on the first building in what will soon be a brand-new town on the shores of Silver Lake.

Laura Ingalls Wilder (1867–1957) was born in a log cabin in the Wisconsin woods. With her family, she pioneered throughout America’s heartland during the 1870s and 1880s, finally settling in Dakota Territory. She married Almanzo Wilder in 1885; their only daughter, Rose, was born the following year. The Wilders moved to Rocky Ridge Farm at Mansfield, Missouri, in 1894, where they established a permanent home. After years of farming, Laura wrote the first of her beloved Little House books in 1932. The nine Little House books are international classics. Her writings live on into the twenty-first century as America’s quintessential pioneer story.

Garth Williams is the renowned illustrator of almost one hundred books for children, including the beloved Stuart Little by E. B. White, Bedtime for Frances by Russell Hoban, and the Little House series by Laura Ingalls Wilder.

He was born in 1912 in New York City but raised in England. He founded an art school near London and served with the British Red Cross Civilian Defense during World War II. Williams worked as a portrait sculptor, art director, and magazine artist before doing his first book Stuart Little, thus beginning a long and lustrous career illustrating some of the best known children's books.

In addition to illustrating works by White and Wilder, he also illustrated George Selden’s The Cricket in Times Square and its sequels (Farrar Straus Giroux). He created the character and pictures for the first book in the Frances series by Russell Hoban (HarperCollins) and the first books in the Miss Bianca series by Margery Sharp (Little, Brown). He collaborated with Margaret Wise Brown on her Little Golden Books titles Home for a Bunny and Little Fur Family, among others, and with Jack Prelutsky on two poetry collections published by Greenwillow: Ride a Purple Pelican and Beneath a Blue Umbrella. He also wrote and illustrated seven books on his own, including Baby Farm Animals (Little Golden Books) and The Rabbits’ Wedding (HarperCollins).

1. Little House Collection : A Full-Color Collector's Set of the First Five Books: Little House in the Big Woods, Farmer Boy, Little House on the Prairie, On the Banks of Plum Creek, By the Shores of Silver Lake

Description du livre Boxed Set. Etat : New. Boxed Set. Set during the pioneer days of the late 1800s and early 1900s, Laura Ingalls Wilder's books chronicle her life growing up on the Western frontier. For the first time in the history of.Shipping may be from multiple locations in the US or from the UK, depending on stock availability. 999 pages. 3.107. N° de réf. du vendeur 9780060754280