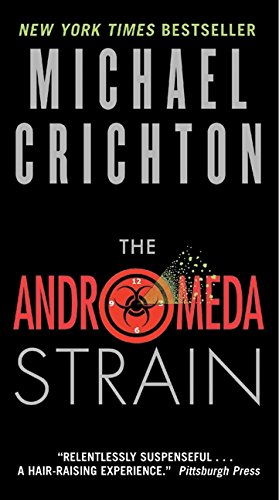 Five prominent biophysicists give the United States government an urgent warning: sterilisation procedures for returning space probes may be inadequate to guarantee uncontaminated re-entry to the atmosphere.
Two years later, Project Scoop sends seventeen satellites into the fringes of space in order to 'collect organisms and dust for study.'
Then a probe satellite falls to earth, landing in a desolate area of northeastern Arizona. In the nearby town of Piedmont, bodies lie heaped and flung across the ground, faces locked in frozen surprise.
The terror has begun...
'He had me convinced it was all really happening'
Christopher Lehmann-Haupt, NEW YORK TIMES

'Science fiction, which once frightened because it seemed so far out, now frightens because it seems so near. The Andromeda Strain is as matter-of-fact as the skull-and-crossbones instructions on a bottle of poison - and just as chillingly effective' LIFE

'Terrifying... One of the most important novels of the year'
LIBRARY JOURNAL

The United States government is given a warning by the pre-eminent biophysicists in the country: current sterilization procedures applied to returning space probes may be inadequate to guarantee uncontaminated re-entry to the atmosphere.

Two years later, seventeen satellites are sent into the outer fringes of space to "collect organisms and dust for study." One of them falls to earth, landing ina desolate area of Arizona.

Twelve miles from the landing site, in the town of Piedmont, a shocking discovery is made: the streets are littered with the dead bodies of the town's inhabitants, as if they dropped dead in their tracks.