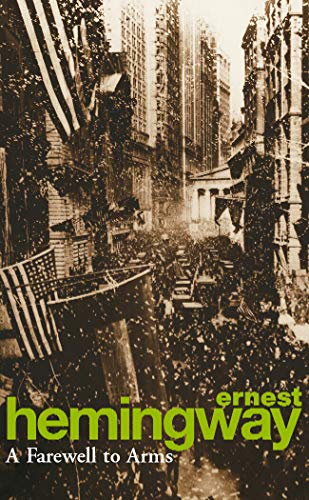 In 1918 Ernest Hemingway went to war. He volunteered for ambulance service in Italy, was wounded and twice decorated. Out of his experience came A Farewell to Arms. Hemingway's unforgettable book recreates the fear, the courage and the comradeship of warfare with total conviction. But A Farewell to Arms is not only a novel of war, it is also a love story of immense drama and uncompromising passion.

This special edition lifts the lid on Hemingway's creative process. Included here are his early drafts, all 47 alternative endings and the author's 1948 introduction, providing a fascinating glimpse into the construction of this great masterpiece.

See also: Death in the Afternoon

Description du livre Paperback. Etat : new. Paperback. In 1918 Ernest Hemingway went to war, to the 'war to end all wars'. He volunteered for ambulance service in Italy, was wounded and twice decorated. Out of his experiences came A Farewell to Arms. Hemingway's description of war is unforgettable. He recreates the fear, the comradeship, the courage of his young American volunteer and the men and women he meets in Italy with total conviction. But A Farewell to Arms is not only a novel of war. In it Hemingway has also created a love story of immense drama and uncompromising passion. From his own experiences of war, Hemingway depicts the fear, the chaos, the comradeship and the courage, and also presents a love story of drama and passion. A young American volunteers for the Italian ambulance service in World War I. Near the front he meets and falls in love with a British nurse. Shipping may be from multiple locations in the US or from the UK, depending on stock availability. Nį de rťf. du vendeur 9780099910107

Description du livre Paperback. Etat : New. Language: English. Brand new Book. In 1918 Ernest Hemingway went to war, to the 'war to end all wars'. He volunteered for ambulance service in Italy, was wounded and twice decorated. Out of his experiences came his early masterpiece, A Farewell to Arms. In an unforgettable depiction of war, Hemingway recreates the fear, the comradeship, the courage of his young American volunteers and the men and women he encounters along the way with conviction and brutal honesty. A love story of immense drama and uncompromising passion, A Farewell to Arms offers a unique and unflinching view of the world and people, by the winner of the 1954 Nobel Prize for Literature. Nį de rťf. du vendeur AAZ9780099910107