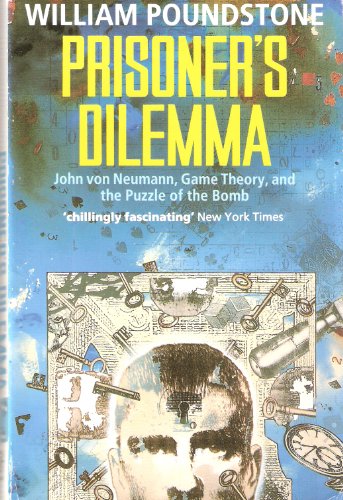 Prisoner's Dilemma John von Neumann invented the digital computer, played a key role in the development of the atom bomb, constructed a branch of mathematics known as game theory, and became a defender of a movement to bomb the Russians before they could bomb us. Now comes a biography of this controversial genius and an exploration of his greatest idea--one that nearly triggered a nuclear war in 1950. Photographs. Full description

Should you watch public television without pledging?...Exceed the posted speed limit?...Hop a subway turnstile without paying? These questions illustrate the so-called "prisoner's dilemma", a social puzzle that we all face every day. Though the answers may seem simple, their profound implications make the prisoner's dilemma one of the great unifying concepts of science. Watching players bluff in a poker game inspired John von Neumann—father of the modern computer and one of the sharpest minds of the century—to construct game theory, a mathematical study of conflict and deception. Game theory was readily embraced at the RAND Corporation, the archetypical think tank charged with formulating military strategy for the atomic age, and in 1950 two RAND scientists made a momentous discovery.

Called the "prisoner's dilemma," it is a disturbing and mind-bending game where two or more people may betray the common good for individual gain. Introduced shortly after the Soviet Union acquired the atomic bomb, the prisoner's dilemma quickly became a popular allegory of the nuclear arms race. Intellectuals such as von Neumann and Bertrand Russell joined military and political leaders in rallying to the "preventive war" movement, which advocated a nuclear first strike against the Soviet Union. Though the Truman administration rejected preventive war the United States entered into an arms race with the Soviets and game theory developed into a controversial tool of public policy—alternately accused of justifying arms races and touted as the only hope of preventing them.

A masterful work of science writing, Prisoner's Dilemma weaves together a biography of the brilliant and tragic von Neumann, a history of pivotal phases of the cold war, and an investigation of game theory's far-reaching influence on public policy today. Most important, Prisoner's Dilemma is the incisive story of a revolutionary idea that has been hailed as a landmark of twentieth-century thought.

William Poundstone studied physics at the Massachusetts Institute of Technology. He is the author of The Recursive Universe, about information theory and physics, and Labyrinths of Reason, an exploration of paradox in science. He is also known as the author of such popular books as Big Secrets, The Ultimate, and Prisoner’s Dilemma. He has written for Esquire, Harper’s, SPY, and other periodicals. He lives in Los Angeles.

Description du livre Paperback. Etat : Good. The book has been read but remains in clean condition. All pages are intact and the cover is intact. Some minor wear to the spine. N° de réf. du vendeur GOR001704397

Description du livre Paperback. Etat : Very Good. The book has been read, but is in excellent condition. Pages are intact and not marred by notes or highlighting. The spine remains undamaged. N° de réf. du vendeur GOR003667545

Description du livre -. Paperback. Etat : Very Good. A Prisoner's Dilemma This book is in very good condition and will be shipped within 24 hours of ordering. The cover may have some limited signs of wear but the pages are clean, intact and the spine remains undamaged. This book has clearly been well maintained and looked after thus far. Money back guarantee if you are not satisfied. See all our books here, order more than 1 book and get discounted shipping. N° de réf. du vendeur 7719-9780192861627

Description du livre Oxford Paperbacks, 1993. Paperback. Etat : Used; Good. **Simply Brit** Shipped with Premium postal service within 24 hours from the UK with impressive delivery time. We have dispatched from our book depository; items of good condition to over ten million satisfied customers worldwide. We are committed to providing you with reliable and efficient service at all times. N° de réf. du vendeur mon0001710603