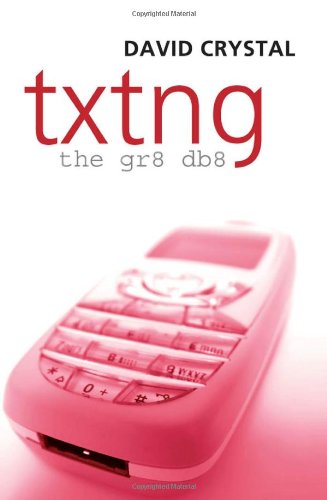 This book takes a long hard look at the text-messaging phenomenon and its effects on literacy, language, and society. Young people who seem to spend much of their time texting sometimes appear unable or unwilling to write much else. Media outrage has ensued. "It is bleak, bald, sad shorthand," writes a commentator in the UK Guardian. "It masks dyslexia, poor spelling, and mental laziness." Exam answers using textese and reports that examiners find them acceptable have led to headlines in the tabloids and leaders in the qualities. Do young people text as much as people think? Do adults? Does texting spell the end of literacy? Is there a panic in the media? David Crystal looks at the evidence. He investigates how texting began and who uses it, why and what for. He shows how to interpret its mix of pictograms, logograms, abbreviations, symbols, and wordplay, and how it works in different languages. He explores the ways similar devices have been used in different eras and discovers that the texting system of conveying sounds and meaning goes back a long way, all the way in fact to the origins of writing - and he concludes that far from hindering literacy, texting may turn out to help it. Contents List

David Crystal is honorary professor of linguistics at the University of Wales, Bangor. He has written or edited over 100 books and published numerous articles for scholarly, professional, and general readerships, in fields ranging from forensic linguistics and ELT to the liturgy and Shakespeare. His books include the Cambridge Encyclopedia of Language (2nd edn 1997), the Cambridge Encyclopedia of the English Language (2nd edn 2003), Words, Words, Words (OUP 2006), and The Fight for English (OUP 2006).