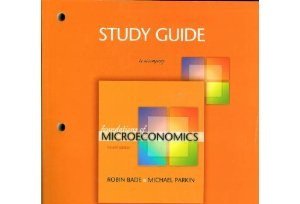 Robin first taught the principles of economics course in 1970 and has taught it (alongside intermediate macroeconomics and international trade and finance) most years since then. She developed many of the ideas found in this text while conducting tutorials with her students at the University of Western Ontario.

Michael Parkin studied economics in England and began his university teaching career immediately after graduating with a BA from the University of Leicester. He learned the subject on the job at the University of Essex, England’s most exciting new university of the 9160s, and at the age of 30 became one of the youngest full professors. He is a past president of the Canadian Economics Association and has served on the editorial boards of the American Economic Review and the Journal of Monetary Economics. His research on macroeconomics, monetary economics, and international economics has resulted in more than 160 publications in journals and edited volumes, including the American Economic Review, theJournal of Political Economy, theReview of Economic Studies, theJournal of Monetary Economics, and theJournal of Money, Credit, and Banking. He is the author of the best-selling Addison-Wesley textbook, Economics.

Robin and Michael are a wife-and-husband duo. Their most notable joint research created the Bade-Parkin Index of central bank independence and spawned a vast amount of research on that topic. They don’t claim credit for the independence of the new European Central Bank, but its constitution and the movement toward greater independence of central banks around the world were aided by their pioneering work. They are dedicated to the challenge of explaining economics ever more clearly to an ever-growing body of students.

This text comes packaged with an access kit for the new easy-to-use format of MyEconLab, which requires no set-up by the professor. With this, students can access practice problems for each chapter in the book, graphing questions, learning resources, and live tutoring. Professors who plan to use advanced course management online should order the book with MyEconLab in CourseCompass. View ‘Alternate Versions’ of this book on the web catalog page, or contact your local representative for details.

Research shows the best way to learn is to put concepts to work with repeated practice. For this reason, frequent, quality practice is the cornerstone of the tightly-knit Foundations of Microeconomics learning system, building student success in economics by doing economics.

First, student attention is focused on what to study through a Checklist of clearly defined core concepts in each chapter. Section by section, Checkpoints demonstrate how to study by stepping through a Practice Problem and then engaging students with a parallel Exercise. In addition, the Third Edition addresses why we study economics through a new feature, Reality Check. With Foundations of Microeconomics, students are taught to view economics as a skill to be honed rather than a collection of topics to be memorized.

Acheter D'occasion
état :  Assez bon
A copy that has been read, but... En savoir plus sur cette édition

Description du livre Prentice Hall Canada. Paperback. Etat : Very Good. A copy that has been read, but remains in excellent condition. Pages are intact and are not marred by notes or highlighting, but may contain a neat previous owner name. The spine remains undamaged. At ThriftBooks, our motto is: Read More, Spend Less. N° de réf. du vendeur G0201793415I4N00