Articles liés ŕ Toward a True Kinship of Faiths: How the World's...

Dalai Lama Toward a True Kinship of Faiths: How the World's Religions Can Come Together

Toward a True Kinship of Faiths: How the World's Religions Can Come Together 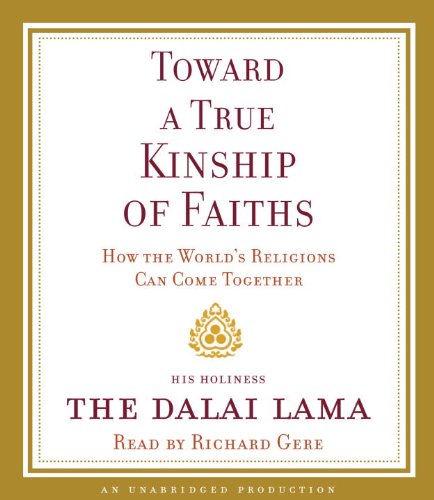 When I was growing up in Tibet, and especially after my serious engagement in studies of classical Buddhist thought and practice from the age of fifteen, I used to feel that my own Buddhist religion was the best. I thought that there simply could not be any other faith tradition that could rival the depth, sophistication, and inspirational power of Buddhism. Other religions must, at best, be “so-so.” Looking back, I feel embarrassed by my naďveté, although it was the view of an adolescent boy immersed in his own inherited religious tradition. Yes, I was vaguely aware of the existence of a great world religion called Christianity that propounds the way of salvation through the life of its savior, Jesus Christ. In fact, as a child I had heard the story of how some Christian priests had once established a mission in western Tibet in the seventeenth century. There was also a small community of Tibetan Muslims right up until modern times, who had lived in Lhasa city for over four centuries. As for Hindus and Jains, followers of the two other major religions native to India, I was convinced that the philosophical arguments, found in the classical Buddhist critiques of their tenets, had effectively demonstrated the superiority of the Buddhist faith centuries ago.

Needless to say such naďveté could be sustained only so long as I remained isolated from any real contact with the world’s other religions. The first time I had any direct contact with a real Hindu was when a sadhu, an Indian holy man, with matted hair and white lines of ash painted on his forehead, appeared at the Potala Palace when I was a child. He was shouting “Dalai Lama, Dalai Lama!,” and appeared to have wanted to see me. Of course, he spoke no Tibetan and nobody in the vicinity spoke any Hindi. There was quite a commotion as my attendants, bodyguards, and all sorts of onlookers tried to stop him! Nobody had any idea who or what he was, or from what religious background he came. The pivotal moment of contact came when I had the opportunity to visit India for the first time in 1956. Before this, the only other country I had been to was China, which was then in the full swing of communism.


It was the crown prince of Sikkim, in his capacity as the president of the Maha Bodhi Society, as well as the special committee set up by the government of India to organize the 2,500th anniversary of the Buddha’s death, known as the parinirvana, who officially invited me to India. My spiritual colleague, the late Panchen Lama (who later suffered a lot in the wake of the communist takeover of Tibet yet did so much for the Tibetan people until his untimely death in Tibet in 1986), also joined me on this historic visit to India. During more than three months’ stay in India at that time, I had the honor to meet many people from all walks of life, as well as from all kinds of religious backgrounds. The president of India, Dr. Rajendra Prasad, graciously engaged me in deep conversation on several occasions. A noted legal scholar, India’s first president was also a deeply religious man who took seriously the historical legacy of India as a birthplace of some of the world’s great religions. His humility and his deep humanity made me feel that in being with him I was in the presence of a truly spiritual man, a being dedicated to the ideal of a genuinely selfless life of service. India’s vice president then was Dr. Sarvepalli Radhakrishnan, a famed scholar of Indian philosophy and religion. Speaking with him was like being treated to an intellectual feast. On the personal level, getting to know the president and vice president, as well as Pandit Jawaharlal Nehru, India’s first Prime Minister, made me feel somehow close to the great being Mahatma Gandhi, whom we Tibetans used to call at that time Gandhi Maharaja (literally, “Gandhi, the Great King!”).

One meeting that left an enduring memory was a surprise visit from a senior Jain master who came to see me with an assistant monk. I remember clearly being surprised by the asceticism of these two Jain monks. It was, I later came to know, part of their everyday lifestyle always to sit on hard surfaces and not on soft cushions. Since we were in an official guesthouse, there was hardly any furniture without soft padding on the seats. So, finally, the monks sat on the coffee table. We had a lengthy conversation on the similarities between Buddhism and Jainism, which historians often refer to as twin religions. Here, for the first time in my experience, was a real Jain practitioner whose articulation of his own faith tradition had little resemblance to the characterization of Jain views in the scholastic texts and refutations I had studied in my youth!

After the official celebrations of the Buddha’s parinirvana, I was able to go on pilgrimage to the ancient Buddhist holy sites, especially Bodh Gaya, where the Buddha attained enlightenment; Lumbini, where he was born; and Sarnath, near Varanasi, where he preached his first sermon on the Four Noble Truths. Face-to-face with the holy stupa at Bodh Gaya and standing in front of the Bodhi Tree, which is descended from the very tree under which the Buddha attained enlightenment more than 2,500 years ago, I was moved to tears. This holy place is revered by Buddhists the world over—in Tibet there was even a custom of sculpting miniature models of the stupa at Bodh Gaya as objects of veneration. In my first autobiography, written soon after my going into exile in India, I described my emotions when I first saw the Bodh Gaya stupa:

From my very early youth I had thought and dreamed about this visit. Now I stood in the presence of the Holy Spirit who had attained Mahaparinirvana, the highest Nirvana, in this sacred place, and had found for all mankind the path to salvation. As I stood there, a feeling of religious fervor filled my heart, and left me bewildered with the knowledge and impact of the divine power which is in all of us.

While on pilgrimage to the Buddhist sites in central India, I had the chance to witness a truly historic event. At Rajgir—where the tradition believes that the Perfection of Wisdom scriptures, so dear to the practitioners of Mahayana Buddhism, were originally taught—a grand ceremony took place in a colorful tent. Prime Minister Nehru had come to formally accept a gift to the people of India that was brought in person by the then Chinese premier, Zhou En-lai. This was a holy Buddhist relic that, I was told, had been brought to China from India in the seventh century, possibly by the famed Chinese pilgrim Xuán Tsang, and was now being returned to its original home. I felt so deeply honored to be present at this ceremony, which was what we Tibetans call a tashipa, or auspicious occasion. Nehru was agitated at the time because the Tibetan officials who accompanied me to India were divided in their thinking. One group suggested that I remain behind in India until the political situation inside Tibet became more settled, while the other group urged me to go back to Tibet and negotiate with the communist authorities in Beijing.

It was also during this Indian tour that I saw the famous Elephanta Caves, a historically significant sacred site for the Hindu tradition located just off the coast of Mumbai (Bombay). Dated to around the ninth century ce, this temple complex of caves contains many beautiful rock carvings of important divinities from the Hindu pantheon. The central image is a twenty-foot-high three-headed Shiva, whose three faces, I learned, represent the divinity in his three distinct but interconnected forms: the right face, which has a sensuous appearance, represents Shiva as the creator of the world; the left, which has an expression of anger, represents Shiva as the destroyer; while the central face, which has a gentle expression, symbolizes Shiva as the preserver of the universe.

As a Tibetan Buddhist, a follower of a tradition that takes great pride in its continuous lineage from the ancient Indian monastery of Nalanda, with its unsurpassed religious and philosophical legacy, to actually visit the site of Nalanda was truly memorable and moving. It was from here that came most of the great masters whose works are closely studied to this day in the Tibetan monastic colleges—works many of which I had myself studied as a young monk. In fact, one of the founders of Buddhism in Tibet, Shantarakshita, was a noted philosopher from Nalanda in the ninth century and the initiator of an important Buddhist school, the Yogacara Madhyamaka. Shantarakshita’s classic Tattvasamgraha (Compendium of Epistemology) is highly admired to this day as a philosophical masterpiece, both in India and in Tibet. It was wonderful, too, to have the opportunity to pay homage to Nagarjunakonda in southern India, a monastic site associated with the great second-century Buddhist master Nagarjuna, to whom the Tibetan tradition refers as the “Second Buddha.” By the 1980s, the monastery’s actual location was under water, as a result of the construction of a large electrical dam near the site. Personally, being able to walk on the very site where Nagarjuna once lived was truly meaningful. Nagarjuna remains to this day one of the deepest sources of spiritual inspiration and philosophical insight for me.

Looking back to this trip in 1956, I realize that my visit to the Theosophical Society in Chenai (then Madras) left a powerful impression. There I was first directly exposed to people, and to a movement, that attempted to bring together the wisdom of the world’s spiritual traditions as well as science. I felt among the members a sense of tremendous openness to the world’s great religions and a genuine embracing of pluralism. When I returned to Tibet in 1957, after more than three months in what was a mos...

No person today is untouched by what happens in the rest of the world. With this historic development, the Dalai Lama understands that the essential task of humanity is to cultivate peaceful coexistence. But this has long been problematic with religion, and while previous conflicts over religious differences may have been significant, they did not threaten the very survival of humanity. Now, when extremists have access to powerful technologies, a single spark could ignite a powder keg of frightening proportions.

Yet the Dalai Lama shows how the challenges of globalization can also move us in another direction, to a deeper plane where nations, cultures, and individuals connect through their shared human nature. All major religions confront the same perennial questions; each has distinct forms of expression. But this marvelous diversity of insight has the potential for inspiring dialogue that can enrich everyone’s pursuit of wisdom.

Toward a True Kinship of Faiths explores where differences between religions can be genuinely appreciated without serving as sources of conflict, as well as offers a hopeful yet realistic look at how humanity must step into the future.

Toward a True Kinship of Faith: How the World's Religions Can Come Together

Toward a True Kinship of Faiths: How the World's Religions Can Come Together