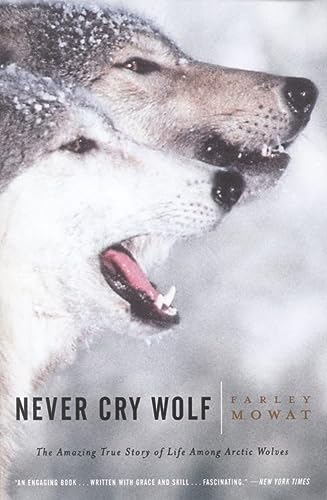 Never Cry Wolf Farley Mowat's laugh-out-loud account of wolf research and government folly is just one of a string of books set on the barren lands of northern Manitoba. Perfect for teens, it is as irreverent as it is moving. Full description

It is a long way in time and space from the bathroom of my Grandmother Mowat’s house in Oakville, Ontario, to the bottom of a wolf den in the Barren Lands of central Keewatin, and I have no intention of retracing the entire road which lies between. Nevertheless, there must be a beginning to any tale; and the story of my sojourn amongst the wolves begins properly in Granny’s bathroom.

When I was five years old I had still not given any indication – as most gifted children do well before that age – of where my future lay. Perhaps because they were disappointed by my failure to declare myself, my parents took me to Oakville and abandoned me to the care of my grandparents while they went off on a holiday.

The Oakville house – “Greenhedges” it was called – was a singularly genteel establishment, and I did not feel at home there. My cousin, who was resident in Greenhedges and was some years older than myself, had already found his métier, which lay in the military field, and had amassed a formidable army of lead soldiers with which he was single-mindedly preparing himself to become a second Wellington. My loutish inability to play Napoleon exasperated him so much that he refused to have anything to do with me except under the most formal circumstances.

Grandmother, an aristocratic lady of Welsh descent who had never forgiven her husband for having been a retail hardware merchant, tolerated me but terrified me too. She terrified most people, including Grandfather, who had long since sought surcease in assumed deafness. He used to while away the days as calm and unruffled as Buddha, ensconced in a great leather chair and apparently oblivious to the storms which swirled through the corridors of Greenhedges. And yet I know for a fact that he could hear the word “whiskey” if it was whispered in a room three stories removed from where he sat.

Because there were no soulmates for me at Greenhedges, I took to roaming about by myself, resolutely eschewing the expenditure of energy on anything even remotely useful; and thereby, if anyone had had the sense to see it, giving a perfectly clear indication of the pattern of my future.

One hot summer day I was meandering aimlessly beside a little local creek when I came upon a stagnant pool. In the bottom, and only just covered with green scum, three catfish lay gasping out their lives. They interested me. I dragged them up on the bank with a stick and waited expectantly for them to die; but this they refused to do. Just when I was convinced that they were quite dead, they would open their broad ugly jaws and give another gasp. I was so impressed by their stubborn refusal to accept their fate that I found a tin can, put them in it along with some scum, and took them home.

I had begun to like them, in an abstract sort of way, and wished to know them better. But the problem of where to keep them while our acquaintanceship ripened was a major one. There were no washtubs in Greenhedges. There was a bathtub, but the stopper did not fit and consequently it would not hold water for more than a few minutes. By bedtime I had still not resolved the problem and, since I felt that even these doughty fish could hardly survive an entire night in the tin can, I was driven to the admittedly desperate expedient of finding temporary lodgings for them in the bowl of Granny’s old-fashioned toilet.

I was too young at the time to appreciate the special problems which old age brings in its train. It was one of these problems which was directly responsible for the dramatic and unexpected encounter which took place between my grandmother and the catfish during the small hours of the ensuing night.

It was a traumatic experience for Granny, and for me, and probably for the catfish too. Throughout the rest of her life Granny refused to eat fish of any kind, and always carried a high-powered flashlight with her during her nocturnal peregrinations. I cannot be as certain about the effect on the catfish, for my unfeeling cousin – once the hooferaw had died down a little – callously flushed the toilet. As for myself, the effect was to engender in me a lasting affinity for the lesser beasts of the animal kingdom. In a word, the affair of the catfish marked the beginning of my career, first as a naturalist, and later as a biologist. I had started on my way to the wolf den.

My infatuation with the study of animate nature grew rapidly into a full-fledged love affair. I found that even the human beings with whom the study brought me into contact could be fascinating too. My first mentor was a middle-aged Scotsman who gained his livelihood delivering ice, but who was in fact an ardent amateur mammalogist. At a tender age he had developed mange, or leprosy, or some other such infantile disease, and had lost all his hair, never to recover it – a tragedy which may have had a bearing on the fact that, when I knew him, he had already devoted fifteen years of his life to a study of the relationship between summer molt and incipient narcissism in pocket gophers. This man had become so intimate with gophers that he could charm them with sibilant whistles until they would emerge from their underground retreats and passively allow him to examine the hair on their backs.
Nor were the professional biologists with whom I later came into contact one whit less interesting. When I was eighteen I spent a summer doing field work in the company of another mammalogist, seventy years of age, who was replete with degrees and whose towering stature in the world of science had been earned largely by an exhaustive study of uterine scars in shrews. This man, a revered professor at a large American university, knew more about the uteri of shrews than any other man has ever known. Furthermore he could talk about his subject with real enthusiasm. Death will find me long before I tire of contemplating an evening spent in his company during which he enthralled a mixed audience consisting of a fur trader, a Cree Indian matron, and an Anglican missionary, with an hour-long monologue on sexual aberrations in female pygmy shrews. (The trader misconstrued the tenor of the discourse; but the missionary, inured by years of humorless dissertations, soon put him right.)
My early years as a naturalist were free and fascinating, but as I entered manhood and found that my avocation must now become my vocation, the walls began to close in. The happy days of the universal scholar who was able to take a keen interest in all phases of natural history were at an end, and I was forced to recognize the unpalatable necessity of specializing, if I was to succeed as a professional biologist. Nevertheless, as I began my academic training at the university, I found it difficult to choose the narrow path.

For a time I debated whether or not to follow the lead of a friend of mine who was specializing in scatology – the study of the excretory droppings of animals – and who later became a high-ranking scatologist with the United States Biological Survey. But although I found the subject mildly interesting, it failed to rouse my enthusiasm to the pitch where I could wish to make it my lifework. Besides, the field was overcrowded.

My personal predelictions lay towards studies of living animals in their own habitat. Being a literal fellow, I took the word biology – which means the study of life – at its face value. I was sorely puzzled by the paradox that many of my contemporaries tended to shy as far away from living things as they could get, and chose to restrict themselves instead to the aseptic atmosphere of laboratories where they used dead – often very dead – animal material as their subject matter. In fact, during my time at the university it was becoming unfashionable to have anything to do with animals, even dead ones. The new biologists were concentrating on statistical and analytical research, whereby the raw material of life became no more than fodder for the nourishment of calculating machines.

My inability to adjust to the new trends had an adverse effect upon my professional expectations. While my fellow students were already establishing themselves in various esoteric specialties, most of which they invented for themselves on the theory that if you are the only specialist in a given field you need fear no competition, I was still unable to deflect my interests from the general to the particular. As graduation approached I found that the majority of my contemporaries were assured of excellent research jobs while I seemed to have nothing particular to offer in the biological marketplace. It was, therefore, inevitable that I should end up working for the Government.

The die was cast one winter’s day when I received a summons from the Dominion Wildlife Service informing me that I had been hired at the munificent salary of one hundred and twenty dollars a month, and that I “would” report to Ottawa at once.

I obeyed this peremptory order with hardly more than a twitch of subdued rebelliousness, for if I had learned anything during my years at the university it was that the scientific hierarchy requires a high standard of obedience, if not subservience, from its acolytes.

Two days later I arrived in the windswept, gray-souled capital of Canada and found my way into the dingy labyrinth which housed the Wildlife Service. Here I presented myself to the Chief Mammalogist, whom I had known as a school chum in more carefree days. But alas, he had now metamorphosed into a full-blown scientist, and was so shrouded in professional dignity that it was all I could do to refrain from making him a profound obeisance.

Through the next several days I was subjected to something called “orientation” – a process which, so far as I could see, was designed to reduce me to a malleable state of hopeless depression. At any rate, the legions of Dantesque bureau...

Farley Mowat was born in Belleville, Ontario, in 1921, and grew up in Belleville, Trenton, Windsor, Saskatoon, Toronto, and Richmond Hill. He served in World War II from 1940 until 1945, entering the army as a private and emerging with the rank of captain. He began writing for his living in 1949 after spending two years in the Arctic. Since 1949 he has lived in or visited almost every part of Canada and many other lands, including the distant regions of Siberia. He remains an inveterate traveller with a passion for remote places and peoples. He has twenty-five books to his name, which have been published in translations in over twenty languages in more than sixty countries. They include such internationally known works as People of the Deer, The Dog Who Wouldn’t Be, Never Cry Wolf, Westviking, The Boat That Wouldn’t Float, Sibir, A Whale for the Killing, The Snow Walker, And No Birds Sang, and Virunga: The Passion of Dian Fossey. His short stories and articles have appeared in The Saturday Evening Post, Maclean’s, Atlantic Monthly and other magazines.

Description du livre Paperback. Etat : New. Paperback. The classic of nature writing?the spellbinding story of adventures among arctic wolves?is now available in a new paperback edition.Shipping may be from multiple locations in the US or from the UK, depending on stock availability. 256 pages. 0.210. NḞ de réf. du vendeur 9780316881791