The Miracle at Speedy Motors 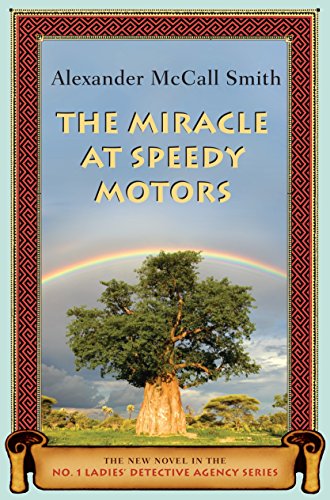 We Are All Care of One Another

The correct address of Precious Ramotswe, Botswana’s foremost solver of problems—in the sense that this was where she could be found between eight in the morning and five in the afternoon, except when she was not there—was The No. 1 Ladies’ Detective Agency, c/o Tlokweng Road Speedy Motors, Gaborone, Botswana. The “care of” was a matter of some disagreement between Mma Ramotswe and Grace Makutsi, her assistant and “right-hand lady,” as she put it. Mma Makutsi, with all the dignity of one who had received ninety-seven per cent in the final examinations of the Botswana Secretarial College, took the view that to say that the agency was care of Speedy Motors was to diminish its importance, even if it was true that the agency occupied a small office at the side of the garage. Those who really counted in this life, she maintained, were usually not care of anybody.

“We are the ones they come looking for,” she argued, with perhaps less than perfect logic. “When people come to this place, Mma, they look for us, not for the garage. The garage customers all know where the garage is. So our name should be first in the address, not the other way round, Mma. If anything, Speedy Motors should be care of us.”

She looked at Mma Ramotswe as she said this, and then quickly added: “That is not to say that Mr. J.L.B. Matekoni and his garage are not important, Mma. That is not to say such a thing. It is just a question of . . .”

Mma Ramotswe waited for her assistant to complete the sentence, but nothing further came. That was the trouble with Mma Makutsi, she thought; she left things hanging in the air, often the most important things. What was it a question of? It must be a question of status, she decided; Mma Makutsi could be very prickly about that. There had been that business about her being described as “senior secretary” when she had only been in the job for a couple of months and when there was nobody junior to her in the firm; in fact, when there was nobody else at all in the firm. Then, once she had been promoted to assistant detective, it had not been long before she had asked when she could expect to be an “associate detective.” That promotion had come, as had her earlier advancement, at a time when Mma Ramotswe had been feeling guilty about something or other and had felt the need to smooth ruffled feathers. But now that she was an associate detective it was difficult to see what the next step could be. She had a suspicion that Mma Makutsi hankered after the title of “chief detective”—a suspicion which was founded on Mma Ramotswe’s having found in the waste-paper basket a crumpled piece of paper on which Mma Makutsi had been trying out new signatures. Not only were there several attempts at Mma Grace Radiphuti, Radiphuti being the surname of her fiancé, Phuti, but there was also a scrawled signature, Grace Makutsi, under which she had written Chief Detective.

Mma Ramotswe had re-crumpled the paper and tossed it back into the basket. She felt bad about having read it in the first place; one should not look uninvited at the papers of another, even if they have been discarded. And it was entirely understandable, normal even, that an engaged woman should practise the signature she will use after her marriage. Indeed, Mma Ramotswe suspected that most women secretly experimented with a new signature shortly after meeting a man they looked upon with favour—even if that man had not expressed any interest in them. A handsome and eligible man might expect to have his name tried out in this way by many women who fancied themselves on his arm, and there was no harm in this, she thought, unless one believed that women should not prepare quite so willingly for their hearts to be broken. Women, thought Mma Ramotswe, are sometimes like plump chickens in the yard, while outside, circling the fence, were the hyenas, the men. It was not a happy way of envisaging the relation between the sexes, but time and time again she had seen this particular drama played out in exactly that way. And hyenas, one had to admit, were surely destined to break the hearts of chickens; they could do nothing else.

Mma Ramotswe saw nothing undignified in being in the care of anybody. In fact, she thought it was rather reassuring to be in another’s care and, more than that, it was a very convenient way of describing how to find somebody, a way which we used in our everyday lives when talking about those we knew. There were people who were always to be found in the company of one particular friend, and to say, “Oh, you’ll always find him walking around with that other man, you know, the one who lives next to the store,” was surely the same as saying that one was care of the other. Yes, we were all care of one another in the final analysis, at least in Botswana, where people looked for and valued those invisible links that connected people, that made for belonging. We were all cousins, even if remote ones, of somebody; we were all friends of friends, joined together by bonds that you might never see, but that were there, sometimes every bit as strong as hoops of steel.

But, Mma Ramotswe thought that morning as she drank her first cup of red bush tea during her walk about her garden, perhaps this did not apply to everybody; perhaps there were some who were lonely in the middle of all this profusion of friends and relatives, who had lost their people. And that very morning, she would be seeing a woman who had written to her with exactly that problem, a woman who wanted to trace her relatives. Tracing people was bread and butter to somebody in Mma Ramotswe’s profession; at least once a month someone would come into the office and ask her to find somebody—an errant husband, a lover, a child who had drifted away from the family and stopped writing home. Sometimes it was lawyers who contacted her and asked her to find those who stood to inherit cattle, or land, and did not know of the good fortune that awaited them. That was the sort of case that Mma Ramotswe most enjoyed, and when she succeeded in finding such people, as she usually did, she relished the moment when she disclosed to them what was in store. Earlier that week she had found a young man who did not know that his uncle in the north had died and left him three trucks and a taxi. She had forgiven him the speed with which his expression of sorrow at the news of the uncle’s demise was replaced by one of incredulity and then joy when he heard of the vehicles awaiting him under a shade-netting awning somewhere up in Maun. Young men were human, after all, and this young man, she learned, had been saving to build a small house for himself and his bride-to-be. He needed to save no more.

“Three trucks, did you say, Mma? What make?”

Mma Ramotswe had no idea. Trucks were Mr. J.L.B. Matekoni’s concern, not hers. She was not even sure she could identify the manufacturer of her tiny white van; there had been a name painted on the back at one stage, but over the years it had been obliterated by the wind and clouds of dust and the scratching of thorn bushes. Now there was nothing, just ridges in the metal where there had been letters. Not that it mattered, of course: the tiny white van was too old to remember its maker, too ancient to be taken back.

Missing names, missing persons—how remarkable it was, she thought, that we managed to anchor ourselves at all in this world, and that we did so by giving ourselves names and linking those names with places and other people. But there were people, she imagined, whose names said nothing about them and who had only the haziest idea of who they were, people who might never even have known their parents. Mma Ramotswe could not remember her mother, who died when she was a baby, but at least she had known her father, the late Obed Ramotswe, whose memory seemed undimmed by the passage of the years. She thought of him every day, every day, and believed that in due course—but not too soon, she hoped—she would see him again in that place that was Botswana but not Botswana, that place of gentle rain and contented cattle. And perhaps on that day those people who had nobody here would find that there were indeed people for them. Perhaps.

Fans around the world adore the best-selling No. 1 Ladies’ Detective Agency series and its proprietor, Precious Ramotswe, Botswana’s premier lady detective. In this charming series, Mma  Ramotswe—with help from her loyal associate, Grace Makutsi—navigates her cases and her personal life with wisdom, good humor, and the occasional cup of tea.

Mma Ramotswe is busy investigating her latest case: a woman who is looking for her family. The problem is, the woman doesn't know her real name of whether any members of her family are now living. Meanwhile, Phuti Radiphuti has bought Mma Makutsi a glorious new bed. Unfortunately, it will inadvertently cause her several sleepless nights. And life is no less complicated at Tlokweng Road Speedy Motors, where Mr. J.L.B. Matekoni--Mma Ramotswe's estimable husband--has fallen under the sway of a doctor who has promised a miracle cure for his daughter's medical condition, which Mma Ramotswe finds hard to believe. But Precious Ramotswe deals with these difficulties with her usual grace and good humor, and in the end discovers that the biggest miracles in life are often the small ones.

1. The Miracle at Speedy Motors

2. The Miracle at Speedy Motors

3. The Miracle at Speedy Motors

4. The Miracle at Speedy Motors

5. The Miracle at Speedy Motors. A No. 1 Ladies Detective Agency Mystery

6. The Miracle at Speedy Motors

7. The Miracle at Speedy Motors

Description du livre Etat : New. In the ninth mystery of the No. 1 Ladies' Detective Agency series, Precious Ramotswe visits a game preserve to uncover the truth about an elderly American traveler whose safari proves to be his last journey. N° de réf. du vendeur 9780375424489

10. The Miracle at Speedy Motors