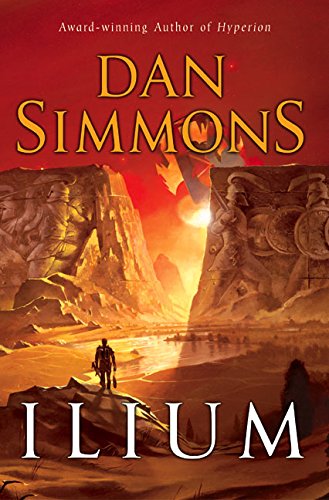 From the towering heights of Olympos Mons on Mars, the mighty Zeus and his immortal family of gods, goddesses, and demigods look down upon a momentous battle, observing -- and often influencing -- the legendary exploits of Paris, Achilles, Hector, Odysseus, and the clashing armies of Greece and Troy.

Thomas Hockenberry, former twenty-first-century professor and Iliad scholar, watches as well. It is Hockenberry's duty to observe and report on the Trojan War's progress to the so-called deities who saw fit to return him from the dead. But the muse he serves has a new assignment for the wary scholic, one dictated by Aphrodite herself. With the help of fortieth-century technology, Hockenberry is to infiltrate Olympos, spy on its divine inhabitants ... and ultimately destroy Aphrodite's sister and rival, the goddess Pallas Athena.

On an Earth profoundly changed since the departure of the Post-Humans centuries earlier, the great events on the bloody plains of Ilium serve as mere entertainment. Its scenes of unrivaled heroics and unequaled carnage add excitement to human lives devoid of courage, strife, labor, and purpose. But this eloi-like existence is not enough for Harman, a man in the last year of his last Twenty. That rarest of post-postmodern men -- an "adventurer" -- he intends to explore far beyond the boundaries of his world before his allotted time expires, in search of a lost past, a devastating truth, and an escape from his own inevitable "final fax." Meanwhile, from the radiation-swept reaches of Jovian space, four sentient machines race to investigate -- and, perhaps, terminate -- the potentially catastrophic emissions of unexplained quantum-flux emanating from a mountaintop miles above the terraformed surface of Mars ...

The first book in a remarkable two-part epic to be concluded in the upcoming Olympos, Dan Simmons's Ilium is a breathtaking adventure, enormous in scope and imagination, sweeping across time and space to connect three seemingly disparate stories in fresh, thrilling, and totally unexpected ways. A truly masterful work of speculative fiction, it is quite possibly Simmons's finest achievement to date in an already storied literary career.

Dan Simmons is the Hugo Award-winning author of Hyperion and The Fall of Hyperion, and their sequels, Endymion and The Rise of Endymion. He has written the critically acclaimed suspense novels Darwin's Blade and The Crook Factory, as well as other highly respected works, including Summer of Night and its sequel A Winter Haunting, Song of Kali, Carrion Comfort, and Worlds Enough & Time. Simmons makes his home in Colorado.