Articles liés ŕ The Next 100 Years: A Forecast for the 21st Century.

Friedman, George The Next 100 Years: A Forecast for the 21st Century. 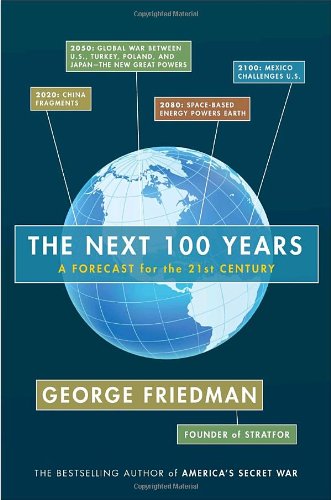 "With a unique combination of cold-eyed realism and boldly confident fortune-telling, Friedman (America’s Secret War) offers a global tour of war and peace in the upcoming century. The author asserts that “the United States’ power is so extraordinarily overwhelming” that it will dominate the coming century, brushing aside Islamic terrorist threats now, overcoming a resurgent Russia in the 2010s and ’20s and eventually gaining influence over space-based missile systems that Friedman names “battle stars.” Friedman is the founder of Stratfor, an independent geopolitical forecasting company, and his authoritative-sounding predictions are based on such factors as natural resources and population cycles. While these concrete measures lend his short-term forecasts credence, the later years of Friedman’s 100-year cycle will provoke some serious eyebrow raising. The armed border clashes between Mexico and the United States in the 2080s seem relatively plausible, but the space war pitting Japan and Turkey against the United States and allies, prognosticated to begin precisely on Thanksgiving Day 2050, reads as fantastic (and terrifying) science fiction. Whether all of the visions in Friedman’s crystal ball actually materialize, they certainly make for engrossing entertainment." --Publishers Weekly

“This is a book about unintended consequences and how the constraints of time and place impact the behavior of individuals and nations and offer a view of future events. [Friedman’s] theories are fascinating....This is an excellent book.”
--Booklist

“Futurologist Friedman entertainingly explains how America will bestride the world during this century. Prophecy, whether by astrologers, science-fiction writers or geopoliticians, has a dismal track record, but readers will enjoy this steady stream of clever historical analogies, economic analyses and startling demographic data.”
--Kirkus

“There is a temptation, when you are around George Friedman, to treat him like a Magic 8-Ball.”
—New York Times Magazine

“Barron’s consistently has found Stratfor’s insights informative and largely on the money—as has the company’s large client base, which ranges from corporations to media outlets and government agencies.”
—Barron’s

“One of the country’s leading strategic affairs experts.”
—Lou Dobbs

8. The Next 100 Years: A Forecast for the 21st Century Friedman, George

9. The Next 100 Years: A Forecast for the 21st Century Friedman, George