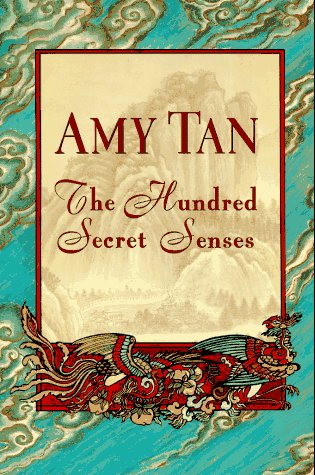 The Hundred Secret Senses is an exultant novel about China and America, love and loyalty, the identities we invent and the true selves we discover along the way. Olivia Laguni is half-Chinese, but typically American in her uneasiness with her patchwork family. And no one in Olivia's family is more embarrassing to her than her half-sister, Kwan Li. For Kwan speaks mangled English, is cheerfully deaf to Olivia's sarcasm, and sees the dead with her "yin eyes."

Even as Olivia details the particulars of her decades-long grudge against her sister (who, among other things, is a source of infuriatingly good advice), Kwan Li is telling her own story, one that sweeps us into the splendor, squalor, and violence of Manchu China. And out of the friction between her narrators, Amy Tan creates a work that illuminates both the present and the past sweetly, sadly, hilariously, with searing and vivid prose.

" The Hundred Secret Senses doesn't simply return to a world but burrows more deeply into it, following new trails to fresh revelations."--Newsweek

Set in San Francisco and in a remote village of Southwestern China, Amy Tan's The Hundred Secret Senses is a tale of American assumptions shaken by Chinese ghosts and broadened with hope. In 1962, five-year-old Olivia meets the half-sister she never knew existed, eighteen-year-old Kwan from China, who sees ghosts with her "yin eyes." Decades later, Olivia describes her complicated relationship with her sister and her failing marriage, as Kwan reveals her story, sweeping the reader into the splendor and violence of mid-nineteenth century China. With her characteristic wisdom, grace, and humor, Tan conjures up a story of the inheritance of love, its secrets and senses, its illusions and truths.

Description du livre G. P. Putnam's Sons, New York, 1995. Hardcover. Etat : New. Etat de la jaquette : As New. 1st Edition. FIRST EDITION/FIRST PRINTING book is new and priced (24.95) jacket is as new. Set in San francisco and in a remote village of southern China, this is a tale of American pragmatism shaken, and smoothed by Chinese ghosts, What proof of love do we seek between mother and daughter, among sisters lovers and friends? In 1962 Olivia, nearly six years old, meets her adult half sister from China, for the first time, Olivia s neglectful mother who is pursuing a new marriage, can't provide the attention her daughter needs, finds Kwan to be a to be a handy caretaker. The story deals with ghosts, betrayal, love and resentment. This is a wonderful story by a true master of her trade. Book is a collector copy. N° de réf. du vendeur 001440

Description du livre Putnams, 1995. Paperback. Etat : New. Etat de la jaquette : New. An excellent New Condition book at a sensible price. Clean, tight and unmarked. A gem. We ship within 24 hours carefully wrapped. No need to pay more. We sell books from New to Acceptable. We take care to be accurate in our description. Most of our books were gently read and in fine condition. BNCTucsonbooks ships daily. Proceeds from the sales of books support an endowed scholarship to Brandeis University, Waltham Mass. N° de réf. du vendeur mon0000088739