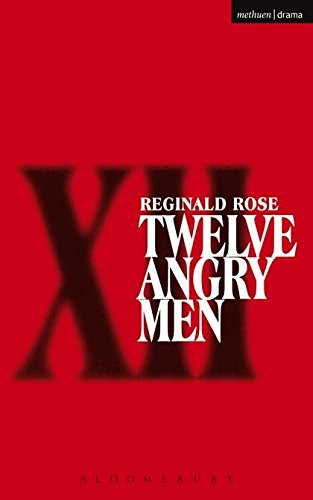 Reginald Rose's landmark American drama was a critically acclaimed teleplay, and went on to become a cinematic masterpiece in 1957 starring Henry Fonda, for which Rose wrote the adaptation. A blistering character study and an examination of the American melting pot and the judicial system that keeps it in check, Twelve Angry Men holds at its core a deeply patriotic belief in the U.S. legal system. The story's focal point, known only as Juror Eight, is at first the sole holdout in an 11-1 guilty vote. Eight sets his sights not on proving the other jurors wrong but rather on getting them to look at the situation in a clear-eyed way not affected by their personal biases. Rose deliberately and carefully peels away the layers of artifice from the men and allows a fuller picture of America, at its best and worst, to form.

David Mamet’s Glengarry Glen Ross won the Pulitzer Prize for drama in 1984. Mamet is also the author of Writing in Restaurants and On Directing Film, both available from Penguin.

Description du livre Paperback. Etat : New. New Edition - New ed. Language: English. Brand new Book. New York, summer 1954 Criminal Courts Building A man is dead The life of another is at stake A "guilty" verdict seems a foregone conclusion. But one member of the jury has the will to probe more deeply into the evidence and the courage to confront the ignorance and the prejudice of some of his fellow jurors. The conflict which follows is fierce and passionate, cutting straight to the heart of the issues of civil liberties and social justice. This edition was published to coincide with the new production directed by Harold Pinter which opened in the West End in 1996. NḞ de réf. du vendeur AAZ9780413706102

Description du livre Paperback / softback. Etat : New. New copy - Usually dispatched within 4 working days. In this play a man is dead, and the life of another is at stake. A guilty verdict seems a foregone conclusion, but Juror Number Nine confronts the ignorant prejudice of some of his fellow members, and a fierce conflict ensues. NḞ de réf. du vendeur B9780413706102