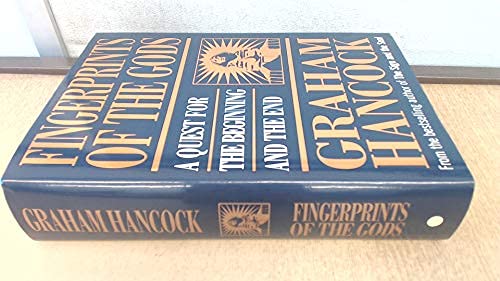 Fingerprints of the Gods is the revolutionary rewrite of history that has persuaded millions of readers throughout the world. An intellectual detective story, it directs probing questions at orthodox history presenting disturbing new evidence that historians have tried - but failed - to explain.

Accurate ancient maps that show the world as it last looked during the Ice Age thousands of years before any civilisation capable of making such maps is supposed to have existed.
Evidence of the devastating scientific and astronomical information encoded into prehistoric myuths.
The incredible feat of the construction of the great pyramids of Egypt and of megalithic temples on the Giza plateau.
The mysterious astronomical alignments of the pyramids and the Great Sphinx.
The antediluvian geology of the Sphinx.
The megalithic temples of the Andes.
The myths of Viracocha and Quetzalcoatl.
The pyramids of the Sun and the Moon in Mexico.
The doomsday calendar and eerie memories of the ancient Maya.
The warning from the Hopi of Arizona.

Graham Hancock is the author of the major international bestsellers The Sign and The Seal, Fingerprints of the Gods and Heaven's Mirror. His books have sold more than five million copies worldwide and have been translated into 27 languages. His public lectures and TV appearances, including the three-hour series Quest For The Lost Civilization, have put his ideas before audiences of tens of millions. He has become recognized as an unconventional thinker who raises legitimate questions about humanity's history and prehistory and offers an increasingly popular challenge to the entrenched views of orthodox scholars.

Description du livre William Heinemann Ltd, 1995. Paperback. Etat : Used; Good. **SHIPPED FROM UK** We believe you will be completely satisfied with our quick and reliable service. All orders are dispatched as swiftly as possible! Buy with confidence!. N° de réf. du vendeur mon0002307794

Description du livre William Heinemann Ltd, 1995. Paperback. Etat : Very Good. The book has been read, but is in excellent condition. Pages are intact and not marred by notes or highlighting. The spine remains undamaged. N° de réf. du vendeur GOR002107260

Description du livre William Heinemann Ltd, 1995. Paperback. Etat : Used; Good. **Simply Brit** Shipped with Premium postal service within 24 hours from the UK with impressive delivery time. We have dispatched from our book depository; items of good condition to over ten million satisfied customers worldwide. We are committed to providing you with reliable and efficient service at all times. N° de réf. du vendeur mon0001502217