Articles liés ŕ The Country of the Pointed Firs

Jewett, Sarah Orne The Country of the Pointed Firs 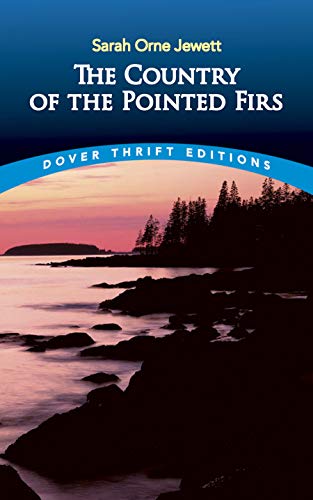 Extrait :
There was something about the coast town of Dunnet which made it seem more attractive than other maritime villages of eastern Maine. Perhaps it was the simple fact of acquaintance with that neighborhood which made it so attaching, and gave such interest to the rocky shore and dark woods, and the few houses which seemed to be securely wedged and tree-nailed in among the ledges by the Landing. These houses made the most of their seaward view, and there was a gayety and determined floweriness in their bits of garden ground; the small-paned high windows in the peaks of their steep gables were like knowing eyes that watched the harbor and the far sea-line beyond, or looked northward all along the shore and its background of spruces and balsam firs. When one really knows a village like this and its surroundings, it is like becoming acquainted with a single person. The process of falling in love at first sight is as final as it is swift in such a case, but the growth of true friendship may be a lifelong affair.

After a first brief visit made two or three summers before in the course of a yachting cruise, a lover of Dunnet Landing returned to find the unchanged shores of the pointed firs, the same quaintness of the village with its elaborate conventionalities; all that mixture of remoteness, and childish certainty of being the centre of civilization of which her affectionate dreams had told. One evening in June, a single passenger landed upon the steamboat wharf. The tide was high, there was a fine crowd of spectators, and the younger portion of the company followed her with subdued excitement up the narrow street of the salt-aired, white-clapboarded little town.
Revue de presse :
"I wanted them all, even those I'd already read."
—Ron Rosenbaum, The New York Observer

"I’ve always been haunted by Bartleby, the proto-slacker. But it’s the handsomely minimalist cover of the Melville House edition that gets me here, one of many in the small publisher’s fine 'Art of the Novella' series."
—The New Yorker

"The Art of the Novella series is sort of an anti-Kindle. What these singular, distinctive titles celebrate is book-ness. They're slim enough to be portable but showy enough to be conspicuously consumed—tiny little objects that demand to be loved for the commodities they are."
—KQED (NPR San Francisco)

"Some like it short, and if you're one of them, Melville House, an independent publisher based in Brooklyn, has a line of books for you... elegant-looking paperback editions ...a good read in a small package."
—The Wall Street Journal

The Country of the Pointed Firs (Paperback)

Description du livre Paperback. Etat : New. New edition. Language: English. Brand new Book. In scene after memorable scene of Sarah Orne Jewett's fictional masterpiece, The Country of Pointed Firs, the Maine-born author recorded what she felt were the rapidly disappearing traditions, manners, and dialect of Maine coast natives at the turn of the twentieth century. In luminous evocations of their lives -- a happy family reunion, an old seaman's ghostly vision, a disappointed lover's self-imposed exile, and more -- Jewett created startlingly real portraits of individual New Englanders and a warm, humorous, and compassionate vision of the New England character.No less a writer than Willa Cather ranked The Country of the Pointed Firs -- with Hawthorne's The Scarlet Letter and Twain's Adventures of Huckleberry Finn -- as one of the three American works most likely to achieve permanent recognition. Long overlooked, Sarah Orne Jewett is today widely acknowledged as an American master and The Country of the Pointed Firs as a landmark in the defining of American character and the American experience. N° de réf. du vendeur FLT9780486281964

The Country of the Pointed Firs (Dover Thrift Editions)