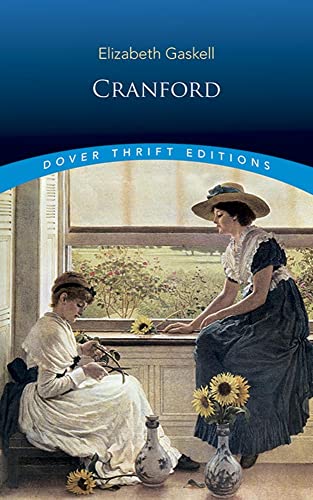 Facing pane LIST OF ILLUSTRATIONS IN COLOURS omething of the same kind perplexed Miss Matty at teatime when she was installed in the great easy-chair opposite to Mr. Jenkyns sin order to gaze her fill. She could hardly drink for looking at him, and as for eatings that was out of the question Frontispiece On coming out of church the brisk Captain paid the most gallant attention to his two daughters. He nodded and smiled to his acquaintances; but he shook hands with none until he had helped Miss Brown to unfurl her umbrella, had relieved her of her prayer book, and had waited patiently till she, with trembling, nervous hands, had take?! up her gown to walk through the wet roads 12 There was all the more time for m.e to hear old-world stories from Miss Pole, while she sat knitting and I making my fathers shirts 42 God bless my soul, madam !but I nearly forgot half my errand 66 And for a long titne, at Miss Matty s, I know we used to make a regular expedition all round the kitchens and cellars every night.
(Typographical errors above are due to OCR software and don't occur in the book.)

Elizabeth Gaskell (1810 - 65) was born in London, but grew up in the north of England in the village of Knutsford. In 1832 she married the Rev. William Gaskell and had four daughters, and one son who died in infancy. Her first novel, Mary Barton, was published in 1848 and won the attention of Charles Dickens and most of her later work was publish in his journals. She was also a lifelong friend of Charlotte Bronte, whose biography she wrote, as well as her many novels and short stories.Patricia Ingham is Senior Research Fellow and Reader at St Anne's College, Oxford. She has written on the Victorian novel and on Hardy in particular. she is the General Editor of all Hardy's fiction in the Penguin Classics and has edited Gaskell's North and South for the series.