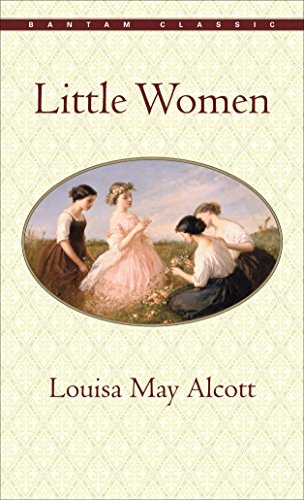 Book by Alcott Louisa May


"Christmas won't be Christmas without any presents,"grumbled Jo, lying on the rug.

"It's so dreadful to be poor!"sighed Meg, looking down at her old dress.

"I don't think it's fair for some girls to have lots of pretty things, and other girls nothing at all," added little Amy, with an injured sniff.

"We've got father and mother, and each other, anyhow,"said Beth, contentedly, from her corner.

The four young faces on which the firelight shone brightened at the cheerful words, but darkened again as Jo said sadly?

"We haven't got father, and shall not have him for a long time." She didn't say "perhaps never,"but each silently added it, thinking of father far away, where the fighting was.

Nobody spoke for a minute; then Meg said in an altered tone, "You know the reason mother proposed not having any presents this Christmas, was because it's going to be a hard winter for every one; and she thinks we ought not to spend money for pleasure, when our men are suffering so in the army. We can't do much, but we can make our little sacrifices, and ought to do it gladly. But I am afraid I don't;"and Megshook her head, as she thought regretfully of all the pretty things she wanted.

"But I don't think the little we should spend would do any good. We've each got a dollar, and the army wouldn't be much helped by our giving that. I agree not to expect anything from mother or you, but I do want to buy Undine and Sintram for myself; I've wanted it so long,'said Jo, who was a bookworm.

"I planned to spend mine in new music,"said Beth, with a little sigh, which no one heard but the hearth-brush and kettle-holder.

"I shall get a nice box of Faber's drawing pencils; I really need them," said Amy, decidedly.

"Mother didn't say anything about our money, and she won't wish us to give up everything. Let's each buy what we want, and have a little fun; I'm sure we grub hard enough to earn it,"cried Jo, examining the heels of her
boots in a gentlemanly manner.

"I know I do, teaching those dreadful children nearly all day, when I'm longing to enjoy myself at home," began Meg, in the complaining tone again.

"You don't have half such a hard time as I do," said Jo. "How would you like to be shut up for hours with a nervous, fussy old lady, who keeps you trotting, is never satisfied, and worries you till you''e ready to fly out of the window or box her ears?"

"It's naughty to fret, but I do think washing dishes and keeping things tidy is the worst work in the world. It makes me cross; and my hands get so stiff, I can't practise good a bit." And Beth looked at her rough hands with a sigh that any one could hear that time.

"I don't believe any of you suffer as I do," cried Amy; "for you don't have to go to school with impertinent girls, who plague you if you don't know your lessons, and laugh at your dresses, and label your father if he isn't rich, and insult you when your nose isn't nice."

"If you mean libel I'd say so, and not talk about labels, as if pa was a pickle-bottle," advised Jo, laughing.

Louisa May Alcott, born in 1832, was the second child of Bronson Alcott of Concord, Massachusetts, a self-taught philosopher, school reformer, and utopian who was much too immersed in the world of ideas to ever succeed in supporting his family. That task fell to his wife and later to his enterprising daughter Louisa May. While her father lectured, wrote, and conversed with such famous friends as Emerson, Hawthorne, and Thoreau, Louisa taught school, worked as a seamstress and nurse, took in laundry, and even hired herself out as a domestic servant at age nineteen. The small sums she earned often kept the family from complete destitution, but it was through her writing that she finally brought them financial independence. “I will make a battering-ram of my head,” she wrote in her journal, “and make a way through this rough-and-tumble world.”

An enthusiastic participant in amateur theatricals since age ten, she wrote her first melodrama at age fifteen and began publishing poems and sketches at twenty-one. Her brief service as a Civil War nurse resulted in Hospital Sketches (1863), but she earned more from the lurid thrillers she began writing in 1861 under the pseudonym of A.M. Barnard. These tales, with titles like “Pauline’s Passion and Punishment,” featured strong-willed and flamboyant heroines but were not identified as Alcott’s work until the 1940s.

Fame and success came unexpectedly in 1868. When a publisher suggested she write a “girl’s book,” she drew on her memories of her childhood and wrote Little Women, depicting herself as Jo March, while her sisters Anna, Abby May, and Elizabeth became Meg, Amy, and Beth. She re-created the high spirits of the Alcott girls and took many incidents from life but made the March family financially comfortable as the Alcotts never had been. Little Women, to its author’s surprise, struck a cord an America’s largely female reading public and became a huge success. Louisa was prevailed upon to continue the story, which she did in Little Men (1871) and Jo’s Boys (1886.) In 1873 she published Work: A Story of Experience, an autobiography in fictional disguise with an all too appropriate title.

Now a famous writer, she continued to turn out novels and stories and to work for the women’s suffrage and temperance movements, as her father had worked for the abolitionists. Bronson Alcott and Louisa May Alcott both died in Boston in the same month, March of 1888.

Description du livre Mass Market Paperback. Etat : New. Mass Market Paperback. Little Women is one of the best loved books of all time. Lovely Meg, talented Jo, frail Beth, spoiled Amy: these are hard lessons of poverty and of growing up in New England du.Shipping may be from multiple locations in the US or from the UK, depending on stock availability. 560 pages. 0.308. N° de réf. du vendeur 9780553212754