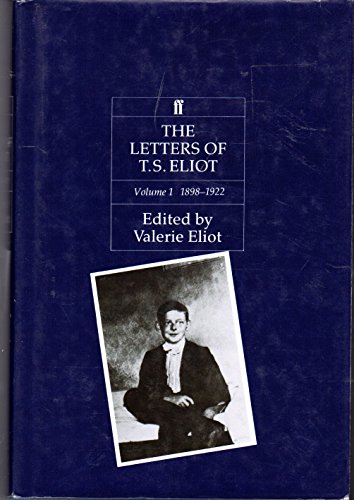 Thomas Stearns Eliot was born in St Louis, Missouri in 1888. He was educated at Harvard, at the Sorbonne in Paris, and at Merton College, Oxford. His early poetry was profoundly influenced by the French symbolists, especially Baudelaire and Laforgue. In his academic studies he specialised in philosophy and logic. His doctoral thesis was on F. H. Bradley. He settled in England in 1915, the year in which he married Vivienne Haigh-Wood and also met his contemporary Ezra Pound for the first time. After teaching for a year or so he joined Lloyds Bank in the City of London in 1917, the year in which he published his first volume, Prufrock and Other Observations. In 1919 Poems was hand-printed by Leonard and Virginia Woolf. His first collection of essays, The Sacred Wood, appeared in 1920. His most famous work, The Waste Land, was published in 1922, the same year as James Joyce's Ulysses. The poem was included in the first issue of his journal The Criterion, which he founded and edited. Three years later he left the bank to become a director of Faber and Gwyer, later Faber and Faber. His Poems 1909-25 was one of the original titles published by Geoffrey Faber's new firm, and the basis of his standard Collected Poems 1909-1962. In 1927 he was received into the Church of England and also became a British citizen. Ash Wednesday was published at Easter 1930. His masterpiece Four Quartets began with 'Burnt Norton' in 1936, continued with 'East Coker' in 1940, 'The Dry Salvages' in 1941 and 'Little Gidding' in 1942. The separate poems were gathered together as one work in 1943.Eliot's writing for the theatre began with the satirical 'Sweeney Agonistes' fragments. In 1934 he wrote the London churches' pageant play 'The Rock', the choruses from which are preserved in Collected Poems, and the next year he was commissioned by the Canterbury Festival to write Murder in the Cathedral, about the martyrdom of St Thomas a Beckett. The Family Reunion followed in 1939, when he also published his children's classic, Old Possum's Book of Practical Cats, the jacket drawn by Eliot himself. (The Possum was Eliot's alias among friends). He later wrote three more verse plays, all of which were premiered at the Edinburgh Festival: The Cocktail Party, The Confidential Clerk and The Elder Statesman. A film of Murder in the Cathedral was shown at the Venice Film Festival in 1951.Eliot's most important literary criticism is collected in Selected Essays 1917-1932, which he enlarged in 1951. There are a number of other volumes of lectures and essays, among them The Use of Poetry and the Use of Criticism, For Lancelot Andrewes, On Poetry and Poets, and two works of social criticism - The Idea of a Christian Society and Notes Towards the Definition of Culture. Eliot was appointed to the Order of Merit in January 1948 and in the Autumn was awarded the Nobel Prize for Literature. He married for the second time in 1957, to Valerie Fletcher. He died in January 1965. There is a memorial to him in Westminster Abbey, beside those to Tennyson and Browning. His ashes are in St Michael's Church, East Coker, the Somerset village from which his ancestor Andrew Eliot emigrated to America in 1667.After his death his widow edited the long-lost original manuscript of the The Waste Land and a volume of his letters. She also commissioned editions of his early poems Inventions of a March Hare and his Clark and Turnbull lectures The Varieties of Metaphysical Poetry. Old Possum's Book of Practical Cats provided the lyrics for Andrew Lloyd Webber's dance musical Cats, which has been performed all over the world for the past 25 years. Hugh Haughton teaches English at the University of York. He is the editor of Alice's Adventures in Wonderland and Through the Looking Glass (Penguin Classics) and The Chatto Book of Nonsense.

Volume One of the "Letters of T. S. Eliot", edited by Valerie Eliot in 1988, covered the period from Eliot's childhood in St Louis, Missouri, to the end of 1922, by which time he had settled in England, married and published "The Waste Land". Since 1988, Valerie Eliot has continued to gather materials from collections, libraries and private sources in Britain and America, towards the preparation of subsequent volumes of the Letters edition. Among new letters to have come to light, a good many date from the years 1898-1922, which has necessitated a revised edition of Volume One, taking account of approximately two hundred newly discovered items of correspondence. The new letters fill crucial gaps in the record, notably enlarging our understanding of the genesis and publication of "The Waste Land". Valuable, too, are letters from the earlier and less documented part of Eliot's life, which have been supplemented by additional correspondence from family members in America.