Liar's Poker: Rising Through the Wreckage on Wall Street 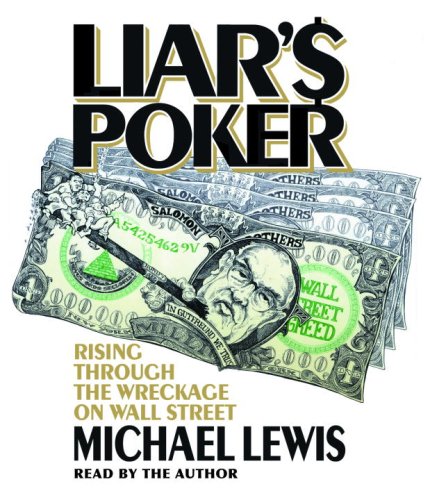 It was wonderful to be young and working on Wall Street in the 1980s: never had so many twenty-four-year-olds made so much money in so little time.

In this shrewd and wickedly funny audiobook, Michael Lewis describes an astonishing era and his own rake’s progress through a powerful investment bank. From an unlikely beginning (art history at Princeton?) he rose in two short years from Salomon Brothers trainee to Geek (the lowest form of life on the trading floor) to Big Swinging Dick–a bond salesman who could turn over millions of dollars’ worth of doubtful bonds with just one call.

A born storyteller, Michael Lewis shows us how things really worked on Wall Street. The bond traders, wearing greed and ambition as badges of honor, might well have swaggered straight from the pages of Bonfire of the Vanities. But for all their outrageous behavior, they were in fact presiding over enormous changes in the world economy. Lewis’s job was to transfer money, in the form of bonds, from those outside American who saved to those inside America who consumed. In doing so, he generated tens of millions of dollars for Salomon Brothers, and earned for himself a ringside seat on the greatest financial spectacle of the decade: the leveraging of America.

THE BOOK THAT REVEALED THE TRUTH ABOUT LONDON AND WALL STREET

From mere trainee to lowly geek, to triumphal Big Swinging Dick: that was Michael Lewis's pell-mell progress through the dealing rooms of Salomon Brothers in New York and London during the heady mid-80s when they were probably the world's most powerful and profitable merchant bank.

Funny, frightening, breathless and heartless, Liar's Poker is the original story of hysterical greed and excessive ambition, one that is now more potent and enthralling than ever.

'If you thought Gordon Gekko of the Wall Street movie was an implausibly corrupt piece of fiction, see how you like the real thing. This rip-the-lid-off account of the bond-dealing brouhaha is the work of a real-life bond salesman.' The Sunday Times

1. Liar's Poker: Rising Through the Wreckage on Wall Street

2. LIAR'S POKER: RISING THROUGH THE