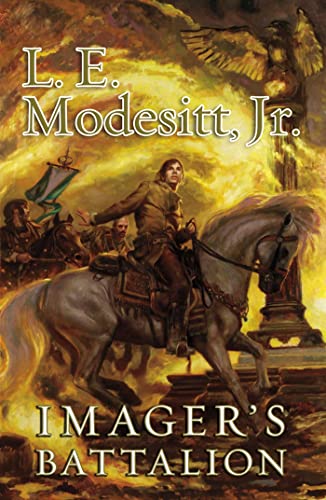 Modesitt produces some of the best fantasy novels published. His numerous series have devout fans.... I look forward to Quaeryt's continuing adventures. --SFRevu Solidly engrossing.--Kirkus Reviews on Princeps Modesitt's work shines with engrossing characters, terrific plotting, and realistic world-building.RT Book Reviews on Imager The Imager Portfolio features some of the best characters Modesitt has ever created, real enough to make you consider what you'd do in their places.Booklist on Imager's Challenge Quaeryt is a fascinating character, and his trials and journey are action packed and yet intellectual.RT Book Reviews, 4 stars, on Scholar Modesitt has only one style: subtle intrigues anchored in vividly drawn, complex characters, stiffly formal conversations and descriptional arabesques in tones of gray. Perhaps the best so far in this consistently fascinating series.Kirkus, Starred Review, on Scholar Modesitt has drawn a superb portrait of an honest and powerful man handed a crisis that even he may not be able to handle. . . . Extremely satisfying. --Booklist on Imager's Intrigue

The sequel to the New York Times bestselling. Princeps follows magical hero Quaeryt as he leads history's first Imager fighting force into war. Given the rank of sub commander by his wife's brother, Lord Bhayar, the ruler of Telaryn, Quaeryt joins an invading army into the hostile land of Bovaria, in retaliation for Bovaria's attempted annexation of Telaryn. But Quaeryt has his own agenda in doing Bhayar's bidding: to legitimize Imagers in the hearts and minds of all men, by demonstrating their value as heroes as he leads his battalion into one costly battle after another. Making matters worse, court intrigues pursue Quaeryt even to the front lines of the conflict, as the Imager's enemies continue to plot against him.

1. Imager's Battalion: The Sixth Book of the Imager Portfolio

2. Imager's Battalion: The Sixth Book of the Imager Portfolio

3. Imager's Battalion: The Sixth Book of the Imager Portfolio