Articles liés ŕ A Bird in the House

Laurence, Margaret A Bird in the House 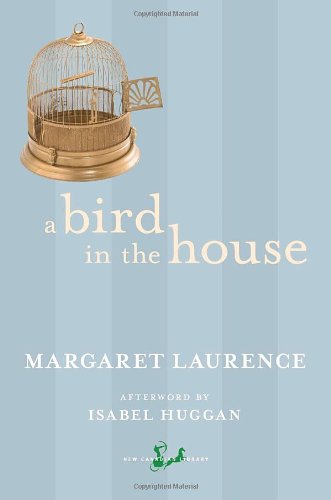 Extrait :
The Sound of the Singing


That house in Manawaka is the one which, more than any other, I carry with me. Known to the rest of the town as “the old Connor place” and to the family as the Brick House, it was plain as the winter turnips in its root cellar, sparsely windowed as some crusader’s embattled fortress in a heathen wilderness, its rooms in a perpetual gloom except in the brief height of summer. Many other brick structures had existed in Manawaka for as much as half a century, but at the time when my grandfather built his house, part dwelling place and part massive-monument, it had been the first of its kind.

Set back at a decent distance from the street, it was screened by a line of spruce trees whose green-black branches swept down to the earth like the sternly protective wings of giant hawks. Spruce was not indigenous to that part of the prairies. Timothy Connor had brought the seedlings all the way from Galloping Mountain, a hundred miles north, not on whim, one may be sure, but feeling that they were the trees for him. By the mid-thirties, the spruces were taller than the house, and two generations of children had clutched at boughs which were as rough and hornily knuckled as the hands of old farmers, and had swung themselves up to secret sanctuaries. On thelawn a few wild blue violets dared to grow, despite frequent beheadings from the clanking guillotine lawn mower, and mauve-flowered Creeping Charley insinuated deceptively weak-looking tendrils up to the very edges of the flower beds where helmeted snapdragon stood in precision.

We always went for Sunday dinner to the Brick House, the home of my mother’s parents. This particular day my father had been called out to South Wachakwa, where someone had pneumonia, so only my mother and myself were flying down the sidewalk, hurrying to get there. My mother walked with short urgent steps, and I had to run to keep up, which I did not like having to do, for I was ten that spring and needed my dignity.

“Dad said you shouldn’t walk so fast because of the baby. I heard him.”

My father was a doctor, and like many doctors, his advice to his own family was of an exceedingly casual nature. My mother’s prenatal care, apart from “For Pete’s sake, honey, quit running around like a chicken with its head cut off,” consisted mainly of admonitions to breathe deeply and drink plenty of water.

“Mercy,” my mother replied, “I don’t have to slow up that much, I should hope. Get a move on, Vanessa. It’s nearly five, and we should’ve been there by now. I suppose Edna will have the dinner all ready, and there won’t be a thing for me to do. I wish to heaven she wouldn’t, but try to tell her. Anyway, you know how your grandfather hates people to be late.”

When we got to the Brick House, my mother stopped hurrying, knowing that Grandfather would be watching from the bay window. She tidied my hair, which was fine and straight and tended to get in my eyes, and she smoothed down the collar of the white middy which I hated and resented having to wear today with my navy pleated skirt as though it had still been winter.

“Your summer dresses are all up to your neck,” my mother had said, “and we just can’t manage a new one this year, but I’m certainly not going to have you going down there looking like a hooligan.”

Now that the pace of our walking had slowed, I began to hop along the sidewalk trying to touch the crooked lines where the cement had been frost-heaved, some winter or other, and never repaired. The ants made their homes there, and on each fissure a neat mound of earth appeared. I carefully tamped one down with my foot, until the ant castle was flattened to nothing. Then I hopped on, chanting.

“Step on a crack, break your grandfather’s back.”

“That’s not very nice, Vanessa,” my mother said. “Anyway, I always thought it was your mother’s back.”

“Well?” I said accusingly, hurt that she could imagine the substitution to have been accidental, for I had genuinely thought it would please her.

“Try not to tear up and down stairs like you did last week,” my mother said anxiously. “You’re too old for that kind of shenanigans.”

Grandfather was standing on the front porch to greet us. He was a tall husky man, drum-chested, and once he had possessed great muscular strength. That simple power was gone now, but age had not stooped him.

“It’s only ten to,” my mother said defensively. “I hoped Ewen might be back – that’s why I waited. He had to go to South Wachakwa on a call.”

“You’d think a man could stay home on a Sunday,” Grandfather said.

“Good grief, Father,” my mother said, “people get sick on Sundays the same as any other day.”

But she said it under her breath, so he did not hear her.

“Well, come in, come in,” he said. “No use standing around here all day. Go and say hello to your grandmother, Vanessa.”

Ample and waistless in her brown silk dress, Grand mother was sitting in the dining room watching the canary. The bird had no name. She did not believe in bestowing names upon non-humans, for a name to her meant a christening, possible only for Christians. She called the canary “Birdie,” and maintained that this was not like a real name. It was swaying lightly on the bird-swing in its cage, its attentive eyes fixed upon her. She often sat here, quietly and apparently at ease, not feeling it necessary to be talking or doing, beside the window sill with its row of African violets in old ginger jars that had been painted orange. She would try to coax the canary into its crystal trilling, but it was a surly creature and obliged only occasionally. She liked me to sit here with her, and sometimes I did, but I soon grew impatient and began squirming, until Grandmother would smile and say, “All right, pet, you run along, now,” and then I would be off like buckshot. When I asked my grandmother if the bird minded being there, she shook her head and said no, it had been there always and wouldn’t know what to do with itself outside, and I thought this must surely be so, for it was a family saying that she couldn’t tell a lie if her life depended on it.

“Hello, pet,” Grandmother said. “Did you go to Sunday school?”

“What did you learn?” Grandmother asked, not prying or demanding, but confidently, serenely.

I was prepared, for the question was the same each week. I rarely listened in Sunday school, finding it more entertaining to compose in my head stories of spectacular heroism in which I figured as central character, so I never knew what the text had been. But I had read large portions of the Bible by myself, for I was constantly hard-up for reading material, so I had no trouble in providing myself with a verse each week before setting out for the Brick House. My lines were generally of a warlike nature, for I did not favour the meek stories and I had no use at all for the begats.

“How are the mighty fallen in the midst of the battle,” I replied instantly.

I was not astonished that my grandmother thought the bloody death of Jonathan was very nice, for this was her unvarying response, whatever the verse. And in fact it was not strange, for to her everything in the Bible was as gentle as she herself. The swords were spiritual only, strokes of lightness and dark, and the wounds poured cochineal.

Grandfather tramped into the dining room. His hair was yellowish white, but once it had been as black as my own, and his brown beaked leathery face was still handsome.

“You’d best come into the living room, Agnes,” he said. “No use waiting here. Beth says Ewen’s gone away out to South Wachakwa. It’ll be a wonder if we get our dinner at all tonight.”

Grandmother rose. “Yes, I was just coming in.”

Grandfather walked over to the window and peered at the plants on the sill.

“Them jars could do with a coat of paint,” he said. “I’ve got some enamel left in the basement. It’s that bottle-green I used on the tool-shed.”

“Is there no orange left?” Grandmother enquired.

“No. It’s all used up. What’s the matter with bottle-green?”

“Oh, nothing’s the matter with it, I guess. I just wondered, that’s all.”

“I’ll do them first thing tomorrow, then,” Grandfather said decisively.

No tasks could be undertaken today, but there was no rule against making plans for Monday, so my grandfather invariably spent the Sabbath in this manner. Thwarted, but making the best of a bad lot, he lumbered around the house like some great  wakeful bear waiting for the enforced hibernation of Sunday to be over. He stopped at the hall door now and rattled it, running hard expert fingers along the brass hinges.

“Hinge is loose,” he said. “The pin’s worn. I’ll have to go down to the store and see if they’ve got one. That Barnes probably won’t have the right size – he’s got no notion of stock. Maybe I’ve got an extra one in the basement. Yes, I have an idea there...
Biographie de l'auteur :
Margaret Laurence was born in Neepawa, Manitoba, in 1926. Upon graduation from Winnipeg’s United College in 1947, she took a job as a reporter for the Winnipeg Citizen.

From 1950 until 1957 Laurence lived in Africa, the first two years in Somalia, the next five in Ghana, where her husband, a civil engineer, was working. She translated Somali poetry and prose during this time, and began her career as a fiction writer with stories set in Africa.

When Laurence returned to Canada in 1957, she settled in Vancouver, where she devoted herself to fiction with a Ghanaian setting: in her first novel, This Side Jordan, and in her first collection of short fiction, The Tomorrow-Tamer. Her two years in Somalia were the subject of her memoir, The Prophet’s Camel Bell.

Separating from her husband in 1962, Laurence moved to England, which became her home for a decade, the time she devoted to the creation of five books about the fictional town of Manawaka, patterned after her birthplace, and its people: The Stone Angel, A Jest of God, The Fire-Dwellers, A Bird in the House, and The Diviners.

Laurence settled in Lakefield, Ontario, in 1974. She complemented her fiction with essays, book reviews, and four children’s books. Her many honours include two Governor General’s Awards for Fiction and more than a dozen honorary degrees.

Margaret Laurence died in Lakefield, Ontario, in 1987.
From the Paperback edition.

Description du livre Paperback. Etat : Good. Item is in good condition. Some moderate creases and wear. This item may not come with CDs or additional parts including access codes for textbooks. Might be an ex-library copy and contain writing/highlighting. Photos are stock pictures and not of the actual item. N° de réf. du vendeur DS-077104626X-3