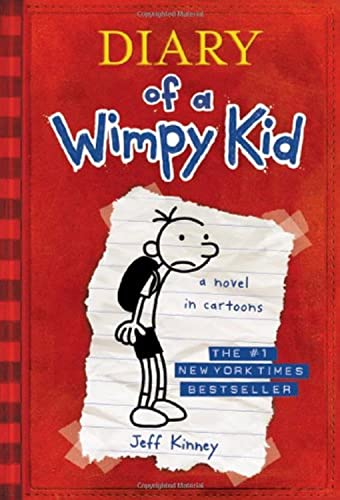 It's a new school year and Greg Heffley finds himself thrust into the harsh landscape of secondary school, where undersized weaklings have to share the hallways with kids who are six-feet-tall, dating and already shaving. While Greg's days are focused on school survival, he's happy to have Rowley, his reliable punching-bag sidekick, along for the ride. But when his best friend's star starts to rise at school, Greg tries to use Rowley's newfound popularity to his advantage. "Diary of a Wimpy Kid" is about everyday secondary school experiences and author/illustrator Jeff Kinney makes us recall our own childhood as we look back on just how perilous school can be. The warts-and-all experiences of his alter ego, Greg Heffley, are recorded in a diary that Greg's mother bought him to make him more "thoughtful." But as Greg says, "Just don't expect me to be all 'Dear Diary' this and 'Dear Diary' that. If she thinks I'm going to write down my 'feelings' or whatever in here, she's crazy." However, as in all the best coming-of-age stories, what Greg Heffley says he won't do and what he actually does are two very different things.

Jeff Kinney was raised in Maryland, USA. In his mid 20's, Jeff Kinney decided to write a book loosely based on his childhood that would encapsulate the funniest things that happened to him and his family over the years. He had never intended to run Diary of a Wimpy Kid on the Web, but the opportunity came up to post his story on funbrain.com as he was developing it. The book launched in May 2004 and has since had over 20 million visitors. Jeff Kinney married his wife, Julie, in 1998 and the couple has two sons. He and his family now live in Plainville, Massachusetts.