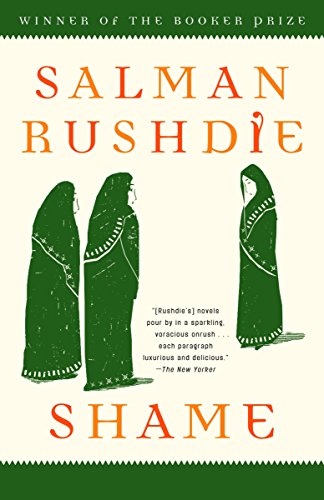 In the remote border town of Q., which when seen from the air resembles nothing so much as an ill-proportioned dumb-bell, there once lived three lovely, and loving, sisters. Their names ... but their real names were never used, like the best household china, which was locked away after the night of their joint tragedy in a cupboard whose location was eventually forgotten, so that the great thousand-piece service from the Gardner potteries in Tsarist Russia became a family myth in whose factuality they almost ceased to believe ... the three sisters, I should state without further delay, bore the family name of Shakil, and were universally known (in descending order of age) as Chhunni, Munnee and Bunny.

And one day their father died.

Old Mr Shakil, at the time of his death a widower for eighteen years, had developed the habit of referring to the town in which he lived as ‘a hell hole’. During his last delirium he embarked on a ceaseless and largely incomprehensible monologue amidst whose turbid peregrinations the household servants could make out long passages of obscenity, oaths and curses of a ferocity that made the air boil violently around his bed. In this peroration the embittered old recluse rehearsed his lifelong hatred for his home town, now calling down demons to destroy the clutter of low, dun-coloured, ‘higgling and piggling’ edifices around the bazaar, now annihilating with his death-encrusted words the cool whitewashed smugness of the Cantonment district. These were the two orbs of the town’s dumb-bell shape: old town and Cantt, the former inhabited by the indigenous, colonized population and the latter by the alien colonizers, the Angrez, or British, sahibs. Old Shakil loathed both worlds and had for many years remained immured in his high, fortress-like, gigantic residence which faced inwards to a well-like and lightless compound yard. The house was positioned beside an open maidan, and it was equidistant from the bazaar and the Cantt. Through one of the building’s few outward-facing windows Mr Shakil on his death-bed was able to stare out at the dome of a large Palladian hotel, which rose out of the intolerable Cantonment streets like a mirage, and inside which were to be found golden cuspidors and tame spider-monkeys in brass-buttoned uniforms and bellhop hats and a full-sized orchestra playing every evening in a stuccoed ballroom amidst an energetic riot of fantastic plants, yellow roses and white magnolias and roof-high emerald-green palms – the Hotel Flashman, in short, whose great golden dome was cracked even then but shone nevertheless with the tedious pride of its brief doomed glory; that dome under which the suited-and-booted Angrez officers and white-tied civilians and ringleted ladies with hungry eyes would congregate nightly, assembling here from their bungalows to dance and to share the illusion of being colourful – whereas in fact they were merely white, or actually grey, owing to the deleterious effect of that stony heat upon their frail cloud-nurtured skins, and also to their habit of drinking dark Burgundies in the noonday insanity of the sun, with a fine disregard for their livers. The old man heard the music of the imperialists issuing from the golden hotel, heavy with the gaiety of despair, and he cursed the hotel of dreams in a loud, clear voice.

‘Shut that window,’ he shouted, ‘so that I don’t have to die listening to that racket,’ and when the old womanservant Hashmat Bibi had fastened the shutters he relaxed slightly and, summoning up the last reserves of his energy, altered the course of his fatal, delirious flow.

‘Come quickly,’ Hashmat Bibi ran from the room yelling for the old man’s daughters, ‘your fatherji is sending himself to the devil.’ Mr Shakil, having dismissed the outside world, had turned the rage of his dying monologue against himself, calling eternal damnation down upon his soul. ‘God knows what got his goat,’ Hashmat despaired, ‘but he is going in an incorrect way.”

The widower had raised his children with the help of Parsee wet-nurses, Christian ayahs and an iron morality that was mostly Muslim, although Chhunni used to say that he had been made harder by the sun. The three girls had been kept inside that labyrinthine mansion until his dying day; virtually uneducated, they were imprisoned in the zenana wing where they amused each other by inventing private languages and fantasizing about what a man might look like when undressed, imagining, during their pre-pubertal years, bizarre genitalia such as holes in the chest into which their own nipples might snugly fit, ‘because for all we knew in those days,’ they would remind each other amazedly in later life, ‘fertilization might have been supposed to happen through the breast.’ This interminable captivity forged between the three sisters a bond of intimacy that would never completely be broken. They spent their evenings seated at a window behind a lattice-work screen, looking towards the golden dome of the great hotel and swaying to the strains of the enigmatic dance music ... and there are rumours that they would indolently explore each other’s bodies during the languorous drowsiness of the afternoons, and, at night, would weave occult spells to hasten the moment of their father’s demise. But evil tongues will say anything, especially about beautiful women who live far away from the denuding eyes of men. What is almost certainly true is that it was during these years, long before the baby scandal, that the three of them, all of whom longed for children with the abstract passion of their virginity, made their secret compact to remain triune, forever bound by the intimacies of their youth, even after the children came: that is to say, they resolved to share the babies. I cannot prove or disprove the foul story that this treaty was written down and signed in the commingled menstrual blood of the isolated trinity, and then burned to ashes, being preserved only in the cloisters of their memories.

But for twenty years, they would have only one child. His name would be Omar Khayyam.

All this happened in the fourteenth century. I’m using the Hegiran calendar, naturally: don’t imagine that stories of this type always take place longlong ago. Time cannot be homogenized as easily as milk, and in those parts, until quite recently, the thirteen-hundreds were still in full swing.

When Hashmat Bibi told them that their father had arrived at his final moments, the sisters went to visit him, dressed in their brightest clothes. They found him in the grip of an asphyxiating fist of shame, demanding of God, in gasps of imperious gloominess, that he be consigned for all eternity to some desert outpost of Jahannum, some borderland of hell. Then he fell silent, and Chhunni, the eldest daughter, quickly asked him the only question of any interest to the three young women: ‘Father, we are going to be very rich now, is that not so?’

‘Whores,’ the dying man cursed them, ‘don’t count on it.”

The bottomless sea of wealth on which everyone had supposed the Shakil family fortunes to be sailing proved, on the morning after his foulmouthed death, to be an arid crater. The fierce sun of his financial incompetence (which he had successfully concealed for decades behind his imposing patriarchal façade, his filthy temper and the overweening hauteur which was his most poisonous legacy to his daughters) had dried out all the oceans of cash, so that Chhunni, Munnee and Bunny spent the entire period of mourning settling the debts for which his creditors had never dared to press the old man while he lived, but for payment of which (plus compound interest) they now absolutely refused to wait one moment longer. The girls emerged from their lifelong sequestration wearing expressions of well-bred disgust for these vultures swooping down to feast upon the carcass of their parent’s great improvidence; and because they had been raised to think of money as one of the two subjects that it is forbidden to discuss with strangers, they signed away their fortune without even troubling to read the documents which the money-lenders presented. At the end of it all the vast estates around Q., which comprised approximately eighty-five per cent of the only good orchards and rich agricultural lands in that largely infertile region, had been lost in their entirety; the three sisters were left with nothing but the unmanageably infinite mansion stuffed from floor to ceiling with possessions and haunted by the few servants who refused to leave, less out of loyalty than from that terror of the life-prisoner for the outside world. And – as is perhaps the universal custom of aristocratically bred persons – they reacted to the news of their ruin by resolving to throw a party.

In later years, they told each other the story of that notorious gala night with a simple glee that restored to them the illusion of being young. ‘I had invitations printed in the Cantt,’ Chhunni Shakil would begin, seated beside her sisters on an old wooden swing-seat. Giggling happily about the old adventure, she continued, ‘And what invitations! Embossed, with gold lettering, on cards stiff as wood. They were like spits in the eye of fate.’

Sir SALMAN RUSHDIE is the multi-award winning author of eleven previous novels--Luka and the Fire of Life, Grimus, Midnight's Children (which won the Booker Prize, 1981, and the Best of the Booker Prize, 2008), Shame,The Satanic Verses, Haroun and the Sea of Stories, The Moor's Last Sigh, The Ground Beneath Her Feet, Fury, Shalimar the Clown and The Enchantress of Florence--and one collection of short stories, East, West. He has also published three works of non-fiction: The Jaguar Smile, Imaginary Homelands: Essays and Criticism 1981-1991 and Step Across This Line, and coedited two anthologies, Mirrorwork and Best American Short Stories 2008. His memoir, Joseph Anton, published in 2012, became an internationally acclaimed bestseller. It was praised as "the finest memoir...in many a year" (The Washington Post). His books have been translated into over forty languages. He is a former president of American PEN.