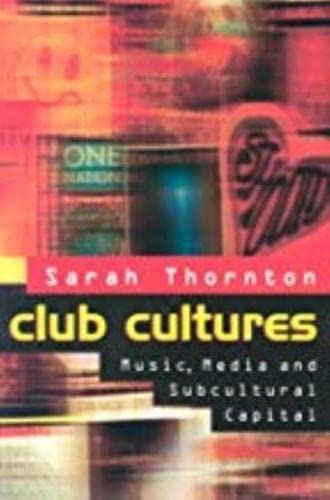 Club Cultures aeo A highly innovative contribution towards the study of popular culture which focuses on the youth cultures that revolve around dance clubs and raves. aeo Written in a highly accessible style and illustrated with case studies, the author examines the development of club cultures or "taste cultures". Full description

′The book covers not only the club scene and its relationship with the media, but also the history of the discotheque, the decline of ′live′ music and the corresponding rise in popularity of its pre–recorded counterpart, as well as the notion of ′hipness′ – a concept central to youth culture.′ The Pulse

′If ... an academic, critical analysis of the far–reaching cultural effects of clubbing sets your pulse racing, this thoroughly researched book makes for an essential bedside companion.′ Musik

′Club Cultures is staking out new territory. Thornton has provided an accessible and interesting account of her subject that will be of great use to anyone trying to find out whatever happened to youth culture since the heady days of Dick Hebdige as long ago as 1979.′ The Times Higher Education Supplement

′Imagine a book that could be subtitled Everything You Always Wanted to Know About Dance But Didn′t Even Know Such Questions Existed.′ Q Magazine

′This major contribution to the study of youth movements also looks at DJs, drugs, fanzines, globalisation and best of all, asks what exactly are the raver hierarchies of hipness? An accessible and informed book, deserving of a wide audience.′ Preview

′A highly accessible yet rigorously written study of popular culture ... an important contribution not only to current media debates, but also that oft overlooked question of club music and gender.′ Everywoman

′One of the smartest and most audacious pieces of musical sociology in years.′ Spin

′Club Cultures provides an interesting out–look on dance culture ... you′ll definitely have a better understanding of the phenomenon after reading it.′ Bikini

′Club Cultures addresses a number of substantive fields within sociology. As a treatise on popular culture, and the sociology of culture generally, the book is an excellent case study that introduces a way of analyzing subcultures on their own ocnsimptive terms.′ American Journal of Sociology

′An admirable degree of theoretical and empirical sophistication and attempt[s] to situate the phenomena under study in a wider social context ... an in–depth account of the origins and meanings of the British club scene ... the empirical observation is deeply and skilfully woven into a rich and carefully constructed analysis ... Club Cultures is a refreshing, provoking and stimulating book which I enjoyed reading. I strongly recommend it and I have no doubt that it will be a success.′ European Journal of Communication

Quatričme de couverture :
This book is a highly innovative contribution to the study of popular culture. Focusing on the youth cultures that revolve around dance clubs and raves, Sarah Thornton highlights the values of authenticity and hipness and explores the complex hierarchies that emerge within the domain of popular culture.

Using a rich combination of methods, Thornton paints a picture of club cultures as ′taste cultures′ brought together by micro–media (like flyers and listings), transformed into self–conscious ′subcultures′ by niche media (like the music and style press), and sometimes recast as ′movements′ with the aid of mass media (like tabloid newspaper front pages). She also analyses the changing status of the medium of recording, from a marginal second–class entertainment in the 1950s to the much celebrated, dominant form of clubs and raves in the 1990s. Drawing from the work of Pierre Bourdieu, Thornton coins the term ′subcultural capital′ to make sense of the distinctions made by ′cool′ youth, paying particular attention to their disparagement of the ′mainstream′ against which they measure their alternative cultural worth.

Well illustrated with case studies, very readable and theoretically innovative, Club Cultures will become established as a key text in cultural and media studies and in the sociology of culture.