Dave Darrin On Mediterranean Service: Or With Dan Dalzell On European Duty (1919) 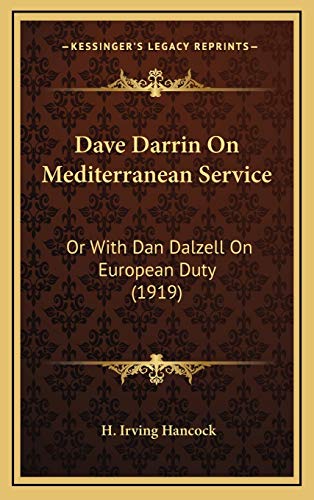 This scarce antiquarian book is a selection from Kessinger Publishing's Legacy Reprint Series. Due to its age, it may contain imperfections such as marks, notations, marginalia and flawed pages. Because we believe this work is culturally important, we have made it available as part of our commitment to protecting, preserving, and promoting the world's literature. Kessinger Publishing is the place to find hundreds of thousands of rare and hard-to-find books with something of interest for everyone!

H. Irving Hancock was an American chemist and writer who wrote prolifically in the late nineteenth and early twentieth century. Best known for his fictional novel centered on the idea of a German invasion of the United States, Hancock also held an avid interest in health and exercise. His writings on Jiu-Jitsu were some of the first to be widely read in the United States. He died in 1922.