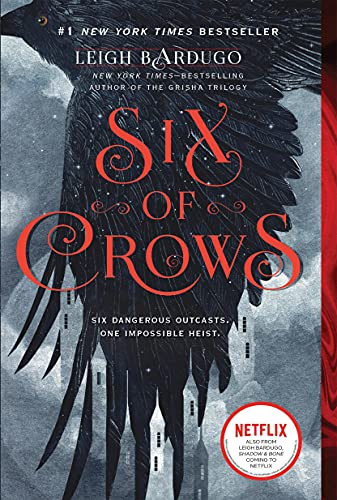 Unlike anything I've ever read (Veronica Roth, author of the Divergent trilogy on The Grisha Trilogy)

This is basically Ocean's Eleven set in a Game of Thrones-esque world, following a young criminal mastermind tasked with breaking into an unbreachable building and freeing a hostage to win vast wealth. The result is a pacey read with electric prose and well-drawn characters ...electric prose (The Independent 2015-11-13)

SIX OF CROWS is a twisty and elegantly crafted masterpiece that thrilled me from beginning to end (Holly Black, author of THE DARKEST PART OF THE FOREST)

Cracking page-turner with a multi-ethnic band of misfits with differing sexual orientations who satisfyingly, believably jell into a family (KIRKUS REVIEWS)

Part original fantasy, part adrenaline fuelled heist, and with just enough romance to keep things interesting, Six of Crows is impossible to put down. Bardugo is a master at an ensemble cast, and it is a joy to see her wonderfully crafted characters come to life and how they all work together. Each one has their own interesting backstory and complex relationships with one another. The fantastic plot is fast moving and full of twists and turns, but it is the fate of the characters that really draws the reader in. Bardugo has an incredible imagination and Six of Crows showcases her writing at its very best. (BOOKTRUST 2015-09-30)

a fitting and brilliantly crafted conclusion to the Grisha trilogy, one that fans will be sighing over happily for years to come (Spec on Spec Fic 2014-07-21)
Prťsentation de l'ťditeur :

Game of Thrones meets Ocean's Eleven in this brand new fantasy epic from the #1 New York Timesbestselling author of Shadow and Bone, Siege and Storm and Ruin and Rising, Leigh Bardugo. As gripping, sweeping and memorable as the Grisha trilogy, Six of Crows will be perfect for fans of George R. R. Martin, Laini Taylor and Kristin Cashore, and will take Leigh's fans back into the world they know and love.

Criminal prodigy Kaz Brekker is offered a chance at a deadly heist that could make him rich beyond his wildest dreams - but he can't pull it off alone.

A convict with a thirst for revenge. A sharpshooter who can't walk away from a wager. A runaway with a privileged past. A spy known as the Wraith. A Heartrender using her magic to survive the slums. A thief with a gift for unlikely escapes. Six dangerous outcasts. One impossible heist.

Kaz's crew is the only thing that might stand between the world and destruction - if they don't kill each other first.

Six of Crows (Paperback or Softback)