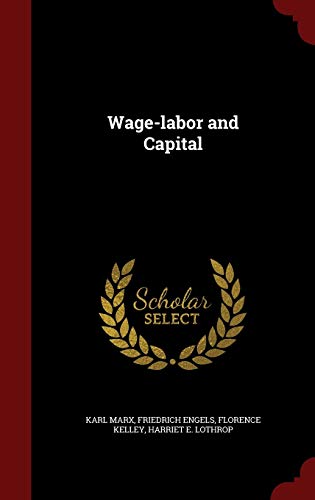 In this volume are presented two of the earlier writings of Karl Marx, with a special Introduction to each by Frederick Engels. The first, entitled Wage-L abor and Capital, was translated for us by Dr. Harriet E. Lothrop, of Boston, from the standard German edition prepared byE ngels in 1891. This is the only complete English edition of it that has yet appeared, and its accuracy was doubly secured by a critical comparison of its every sentence with the German text, made at the request of the translator by Herman Simpson, of New York, who also added foot-. notes wherever comment seemed needful. In the performance of their respective task, both kept in mind the allimportant consideration, that in the works of Marx, as in all works, truly scientific, the exact expression is an essential factor and should not, therefore, be sacrificed to literary style in its transfer from one language to another. To those who are already acquainted with Marx slater essay on Value, Price, and Profit, this much earlier one on Wage-L abor and Capital will no doubt seem somewhat familiar. Still more familiar will both appear to the industrious reader of Capital. And for obvious reasons.
(Typographical errors above are due to OCR software and don't occur in the book.)

Karl Marx was an influential 19th-century philosopher, economist, journalist, and revolutionary. His historical and sociological ideas held sway over generations of scholars, and his incisive descriptions of the workings and effects of capitalism inspired both revolution and reform.

Description du livre Hardback. Etat : New. Language: English. Brand new Book. This work has been selected by scholars as being culturally important, and is part of the knowledge base of civilization as we know it. This work was reproduced from the original artifact, and remains as true to the original work as possible. Therefore, you will see the original copyright references, library stamps (as most of these works have been housed in our most important libraries around the world), and other notations in the work. This work is in the public domain in the United States of America, and possibly other nations. Within the United States, you may freely copy and distribute this work, as no entity (individual or corporate) has a copyright on the body of the work.As a reproduction of a historical artifact, this work may contain missing or blurred pages, poor pictures, errant marks, etc. Scholars believe, and we concur, that this work is important enough to be preserved, reproduced, and made generally available to the public. We appreciate your support of the preservation process, and thank you for being an important part of keeping this knowledge alive and relevant. N° de réf. du vendeur LHB9781297518928