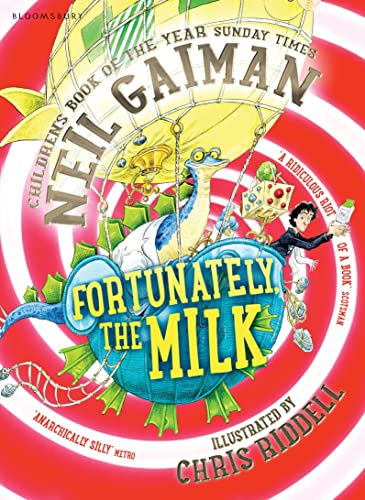 Gaiman knocks it out of the park again with this imaginative story. (School Library Journal)

This would also make a wonderful readaloud, but don’t be surprised if the kids insist that it be read in one sitting--and maybe with a side of cookies and milk. (Bulletin of the Center for Children’s Books)

“If your kids still allow you to read aloud to them, this book is for you.” (Newsday)

“[A]n astounding tale...an absolute delight to read out loud....one part Douglas Adams, one part Doctor Who, and one part The Usual Suspects.” (boingboing.com)

“It’s hard not to love a novel that borrows equally from Calvin and Hobbes and The Usual Suspects. If you read only one book this year, a story with dancing dwarfs is always a wise choice.” (Kirkus Reviews)

Neil Gaiman is the New York Times bestselling author of the novels Neverwhere, Stardust, American Gods, Coraline, Anansi Boys, The Graveyard Book, Good Omens (with Terry Pratchett), The Ocean at the End of the Lane, and The Truth Is a Cave in the Black Mountains; the Sandman series of graphic novels; and the story collections Smoke and Mirrors, Fragile Things, and Trigger Warning. He is the winner of numerous literary honors, including the Hugo, Bram Stoker, and World Fantasy awards, and the Newbery and Carnegie Medals. Originally from England, he now lives in the United States. He is Professor in the Arts at Bard College.