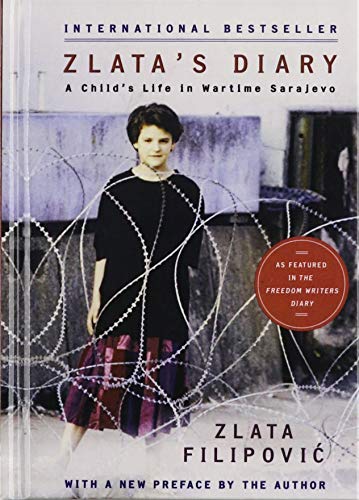 The child's diary that awakened the conscience of the world

When Zlata’s Diary was first published at the height of the Bosnian conflict, it became an international bestseller and was compared to The Diary of Anne Frank, both for the freshness of its voice and the grimness of the world it describes. It begins as the day-today record of the life of a typical eleven-year-old girl, preoccupied by piano lessons and birthday parties. But as war engulfs Sarajevo, Zlata Filipovic becomes a witness to food shortages and the deaths of friends and learns to wait out bombardments in a neighbor’s cellar. Yet throughout she remains courageous and observant. The result is a book that has the power to move and instruct readers a world away.

"The only bright thing to come from [Sarajevo's] recent history." -USA Today

"Conveys the bewilderment and horror of modern-day conflict...One of Zlata's gifts lies in throwing a human light on intolerable events." -San Francisco Chronicle

Zlata Filipovic was given a diary shortly before her tenth birthday and began to write in it regularly. She was an ordinary, if unusuallyintelligent and articulate little girl, and her preoccupations include whether or not to join the Madonna fan club, her piano lessons, her friends andher new skis. But the distant murmur of war draws closer to her Sarajevo home. Her father starts to wear military uniform and herfriends begin to leave the city. One day, school is closed and the next day bombardments begin. The pathos and power of Zlata's diary comes from watching the destruction of a childhood. Her circle of friends isincreasingly replaced by international journalists who come to hear of this little girl's courage and resilience. But the reality is that, as they flyoff with the latest story of Zlata, she remains behind, writing her deepest feelings to 'Mimmy', her diary, and her last remaining friend.