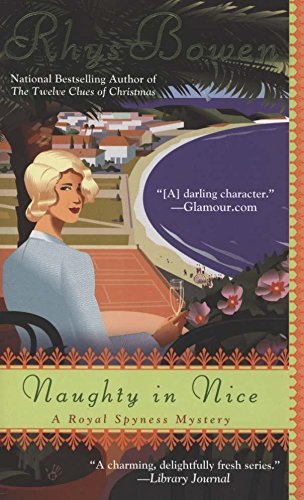 Naughty In Nice The national bestselling author of "Royal Blood" whisks her heroine away to the French Riviera for fun--and danger. OGeorgie's latest adventure is charming and lighthearted as ever.O--"Kirkus Reviews." Full description

"Georgie's latest adventure is charming and lighthearted as ever, though the 1930s setting carries ominous hints of the future." (-Kirkus Reviews)

"It's another delightful, unmissable installment in the Royal Spyness series. Bowen captures the cheeky humor and charm of the Lost Generation, ladling in a healthy dose of dry British wit and fundamental common sense." (-Romantic Times)

"The best part of this delicious series is the cast of characters (well known and otherwise), led, of course, by the level-headed and stiff- upper-lipped Georgiana, who tackles whatever is in front of her, be it murder or romance, with uncommon relish. A royal romp." (-Booklist)

The national bestselling author of Royal Blood whisks her heroine away to the French Riviera for fun-and danger.

Lady Georgiana Rannoch has once again been called into service by Her Majesty the Queen. This time she's sent to Nice on a secret assignment that's nothing to sneeze at-recover the Queen's stolen snuff box.

As much of an honor as it is to be trusted by Her Majesty, an even greater honor awaits Georgie in Nice-as Coco Chanel herself asks Georgie to model her latest fashion. But when a necklace belonging to the Queen is stolen on the catwalk, Georgie has to find two priceless items-and solve a murder. How's a girl to find any time to go to the casino?

Description du livre Etat : Good. Large type edition. Ships from the UK. Former Library book. Shows some signs of wear, and may have some markings on the inside. N° de réf. du vendeur GRP82615586