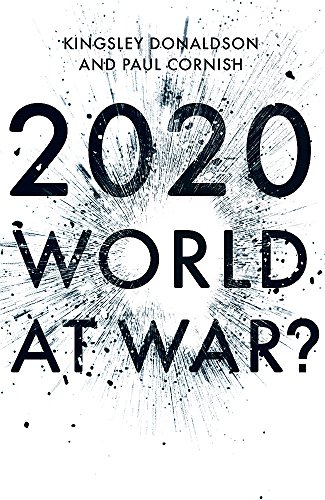 'A timely and cogent reminder that history never ends and is about to be made' - Tim Marshall, author of Prisoners of Geography

'2020: World of War should be read by our political leaders, policy makers and horizon scanners alike' - General Sir Richard Shirreff

'This expert consideration of potential conflicts will be invaluable to us all - not just the policy makers and politicians who will have to deal with those issues' - Jonathan Powell, former Chief of Staff, 10 Downing Street

'Knowing the unknown is the first step in making sure what we fear most doesn't happen' - Jonathan Powell, former Chief of Staff, 10 Downing Street

With the world already struggling to contain conflicts on several continents, with security and defence expenditure under huge pressure, it's time to think the unthinkable and explore what might happen.

As former soldiers now working in defence strategy and conflict resolution, Paul Cornish and Kingsley Donaldson are perfectly qualified to guide us through a credible and utterly convincing 20/20 vision of the year 2020, from cyber security to weapons technology, from geopolitics to undercover operations.

This book is of global importance, offering both analysis and creative solutions - essential reading both for decision-makers and everyone who simply wants to understand our future.

Paul Cornish (Author)
Paul Cornish was educated at the University of St Andrews and the London School of Economics. He then served in the British Army (Royal Tank Regiment) and the Foreign and Commonwealth Office before completing his PhD in strategic history at the University of Cambridge. He is Chief Strategist at Cityforum Public Policy Analysis and Visiting Professor at the National Security College, Australian National University.

Kingsley Donaldson (Author)
KINGSLEY DONALDSON is a retired Army officer. He has served on operations in a number of European and Middle Eastern countries in various roles that span from countering weapons of mass destruction through to negotiating with armed groups in Iraq. His last appointments at the Ministry of Defence were concerned with national defence and security strategy. He now advises a number of governments in his role as Director of the Causeway Institute for Peace-building Conflict Resolution International.