Letters from an American Farmer 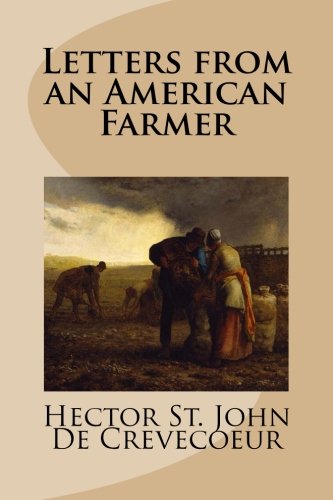 Letters from an American Farmer Describing Certain Provincial Situations, Manners, and Customs not Generally Known; and Conveying Some Idea of the Late and Present Interior Circumstances of the British Colonies in North America (1782) is a series of letters written by French American writer J. Hector St. John de Crèvecœur. The twelve letters cover a wide range of topics, from the emergence of an American identity to discussions concerning the slave trade. Crèvecœur wrote Letters during a period of seven years prior to the American Revolutionary War, whilst farming land near Orange County, New York. The text charts the movements of a fictional narrator, and each Letter concerns a different aspect of life or location in the British colonies of America. The book incorporates a number of styles and genres, including documentary, as well as sociological observations. Although only moderately successful in America, Letters was immediately popular in Europe. Prompted by high demand, Crèvecœur produced an expanded French version that was published in 1784. Often regarded as the first work of American literature, the Letters has exerted a wide-ranging and powerful influence over subsequent texts and authors in that group.

Michel Guillaume Jean de Crèvecœur (December 31, 1735 – November 12, 1813), naturalized in New York as John Hector St. John, was a French-American writer. He was born in Caen, Normandy, France, to the Comte and Comtesse de Crèvecœur (Count and Countess of Crèvecœur).

1. Letters from an American Farmer