Articles liés ŕ Grit: The Power of Passion and Perseverance

Duckworth, Angela Grit: The Power of Passion and Perseverance 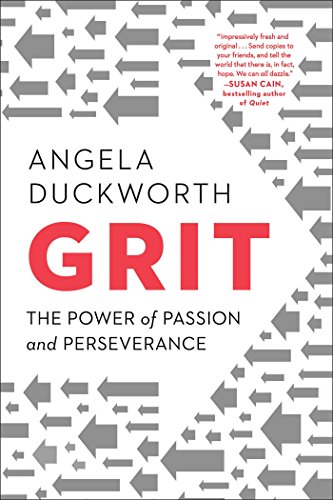 “Duckworth is the researcher most associated with the study and popularization of grit.  And yet what I like about her new book, Grit, is the way she is pulling away from the narrow, joyless intonations of that word, and pointing us beyond the way many schools are now teaching it...Most important, she notes that the quality of our longing matters.  Gritty people are resilient and hard working, sure.  But they also, she writes, know in a very, very deep way what it is they want.”
—David Brooks, New York Times

"A fascinating tour of the psychological research on success...A great service of Ms. Duckworth's book is her down-to-earth definition of passion. To be gritty, an individual doesn't need to have an obsessive infatuation with a goal. Rather, he needs to show 'consistency over time.' The grittiest people have developed long-term goals and are constantly working toward them."
—The Wall Street Journal

"Angela Duckworth [is] the psychologist who has made 'grit' the reigning buzzword in education-policy circles...Duckworth's ideas about the cultivation of tenacity have clearly changed some lives for the better...In this book, Duckworth, whose TED talk has been viewed more than eight million times, brings her lessons to the reading public."
—Judith Shulevitz, The New York Times Book Review

"Grit is a useful guide for parents or teachers looking for confirmation that passion and persistence matter, and for inspiring models of how to cultivate these important qualities."
—The Washington Post

“A robust and engaging read, as Duckworth intersperses her own research with stories from her Chinese-American background, as well as interviews with high achievers in sport, business and the military...[The book includes a] riveting section on raising gritty children. When Duckworth suggests trashing the common parenting line ‘That’s OK, you tried your best’ and replacing it with the demanding yet supportive ‘That didn’t work. Let’s talk about how you approached it and what might work better,’ she made me want to cheer.”
—The Toronto Star

“Grit delves into the personal ingredients of great success. It’s worth reading...the gist is that talent and skill are less valuable than effort.”
—Andrew Ross Sorkin, The New York Times

“Grit is a pop-psych smash.”
—The New Yorker

“With Grit, Duckworth has now put out the definitive handbook for her theory of success. It parades from one essential topic to another on a float of common sense, tossing out scientific insights.”
—Slate

One of "The Hottest Spring Nonfiction Books"
—The Wall Street Journal

In this must-read book for anyone striving to succeed, pioneering psychologist Angela Duckworth shows parents, educators, athletes, students, and business people—both seasoned and new—that the secret to outstanding achievement is not talent but a focused persistence called “grit.”

Why do some people succeed and others fail? Sharing new insights from her landmark research on grit, MacArthur “genius” Angela Duckworth explains why talent is hardly a guarantor of success. Rather, other factors can be even more crucial such as identifying our passions and following through on our commitments.

Drawing on her own powerful story as the daughter of a scientist who frequently bemoaned her lack of smarts, Duckworth describes her winding path through teaching, business consulting, and neuroscience, which led to the hypothesis that what really drives success is not “genius” but a special blend of passion and long-term perseverance. As a professor at the University of Pennsylvania, Duckworth created her own “character lab” and set out to test her theory.

Here, she takes readers into the field to visit teachers working in some of the toughest schools, cadets struggling through their first days at West Point, and young finalists in the National Spelling Bee. She also mines fascinating insights from history and shows what can be gleaned from modern experiments in peak performance. Finally, she shares what she’s learned from interviewing dozens of high achievers—from JP Morgan CEO Jamie Dimon to the cartoon editor of The New Yorker to Seattle Seahawks Coach Pete Carroll.

Winningly personal, insightful, and even life-changing, Grit is a book about what goes through your head when you fall down, and how that—not talent or luck—makes all the difference.