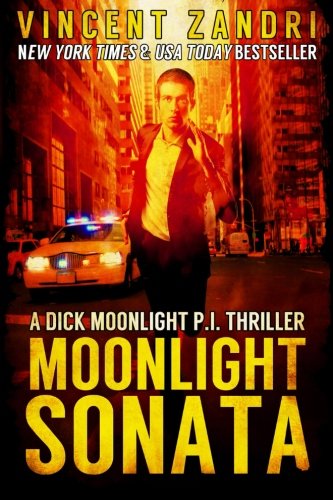 "Zandri's prose flows effortlessly as usual, making it a fast but satisfying read. Many crime novels that attempt this speed lose something in the process, but it's a testament to Zandri's talent that MOONLIGHT SONATA never feels empty."--Ben Sobieck, Crime Fiction Book Blog SOMETIMES A MAN WHO GOES MISSING SHOULD STAY MISSING! From NEW YORK TIMES and USA TODAY Bestselling author, Vincent Zandri, comes the next installment in the internationally acclaimed Dick Moonlight, PI series. For fans of Charlie Huston, Don Winslow, and Harlan Coben, the Dick Moonlight series is pure noir, tossed against a backdrop of hard-boiled action, with some romantic/suspense thrown into the mix When a hotshot literary agent by the name of Suzanne Bonchance lures Richard Moonlight into searching for her missing star client—the boozing, womanizing Roger Walls—the private detective finds himself waist-deep in a whole lot of trouble. But when a sexy, young MFA in Writing student who claims to know Walls comes to his rescue, Moonlight not only becomes smitten with her charm, he also finds himself falling in love with a girl he barely knows. As the trail for Walls narrows, and the truths about everyone who has ever been involved with Roger Walls are revealed, Moonlight finds himself wanting to run away as fast as his legs will take him. One thing he can't outrun, however, are bullets. "Tough, stylish, heartbreaking." --Don Winslow, bestselling author of Savages "If you're a fan of the TV show Castle, you will like this book. It's a wannabe-writer's dream. He draws on his experience as a crime writer and as a photojournalist to give colorful details to a very fast-paced story. The settings are fantastic, and the characters are fun."--Goodreads Reviewer, Shayla Williams "Not much else to say but MOONLIGHT SONATA was all kinds of amazing. I now have myself a new favourite private dick, Dick Moonlight! I cannot wait to treat myself to the rest of this series!"--Goodreads Reviewer, Barbara "Sensational...Masterful...Brilliant." --New York Post "The action never wanes." --Fort Lauderdale Sun-Sentinal "Gritty, fast-paced, lyrical and haunting." --Harlan Coben, bestselling author of Six Years "Non-stop action." --I Love a Mystery "Vincent Zandri nails reader's attention." --Boston Herald "(Zandri) demonstrates an uncanny knack for exposition, introducing new characters and narrative possibilities with the confidence of an old pro...Zandri does a superb job interlocking puzzle pieces." --The San Diego Union-Tribune

Winner of the 2015 ITW Best Original Paperback Novel, Vincent Zandri is the NEW YORK TIMES and USA TODAY bestselling author of more than 16 novels including THE INNOCENT, GODCHILD, THE REMAINS, MOONLIGHT RISES, and EVERYTHING BURNS. He is also the author of numerous Amazon bestselling digital shorts, PATHOLOGICAL, TRUE STORIES and MOONLIGHT MAFIA among them. Harlan Coben has described THE INNOCENT (formerly As Catch Can) as "...gritty, fast-paced, lyrical and haunting," while the New York Post called it "Sensational...Masterful...Brilliant!" Zandri's list of domestic publishers include Delacorte, Dell, Down & Out Books, Thomas & Mercer and Polis Books, while his foreign publisher is Meme Publishers of Milan and Paris. An MFA in Writing graduate of Vermont College, Zandri's work is translated in the Dutch, Russian, French, Italian, and Japanese. Recently, Zandri was the subject of a major feature by the New York Times. He has also made appearances on Bloomberg TV and FOX news. In December 2014, Suspense Magazine named Zandri's, THE SHROUD KEY, as one of the Best Books of 2014. A freelance photo-journalist and the author of the popular "lit blog," The Vincent Zandri Vox, Zandri has written for Living Ready Magazine, RT, New York Newsday, Hudson Valley Magazine, The Times Union (Albany), Game & Fish Magazine, and many more. His novel, MOONLIGHT WEEPS, has been selected by the Private Eye Writers of America as a Finalist for the Shamus Award for Best Paperback Original. He is a resident of both New York and Florence, Italy. For more go to WWW.VINCENTZANDRI.COM