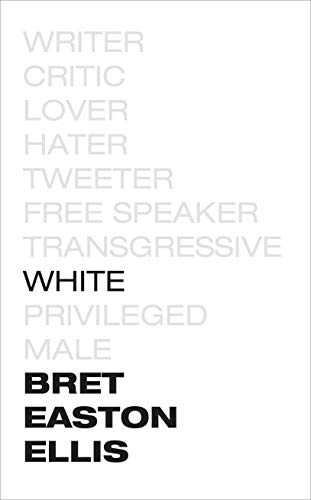 Description du livre Hardback. Etat : New. Language: English. Brand new Book. THE CONTROVERSIAL SUNDAY TIMES TOP TEN ndid, fearless and provocative - the author of American Psycho on who he is and what he thinks is wrong with the world today. Bret Easton Ellis is most famous for his era-defining novel American Psycho and its terrifying anti-hero, Patrick Bateman. With that book, and many times since, Ellis proved himself to be one of the world's most fearless and clear-sighted observers of society - the glittering surface and the darkness beneath.In White, his first work of non-fiction, Ellis offers a wide-ranging exploration of what the hell is going on right now. He tells personal stories from his own life. He writes with razor-sharp precision about the music, movies, books and TV he loves and hates. He examines the ways our culture, politics and relationships have changed over the last four decades. He talks about social media, Hollywood celebrities and Donald Trump. Ellis considers conflicting positions without flinching and adheres to no status quo. His forthright views are powered by a fervent belief in artistic freedom and freedom of speech. Candid, funny, entertaining and blisteringly honest, he offers opinions that are impossible to ignore and certain to provoke. What he values above all is the truth. 'The culture at large seemed to encourage discourse,' he writes, 'but what it really wanted to do was shut down the individual.' Bret Easton Ellis will not be shut down. N° de réf. du vendeur AAZ9781529012392

Description du livre Hardcover. Etat : new. Hardcover. Bret Easton Ellis has wrestled with the double-edged sword of fame and notoriety for more than thirty years now, since Less Than Zero catapulted him into the limelight in 1985, earning him devoted fans and, perhaps, even fiercer enemies. An enigmatic figure who has always gone against the grain and refused categorization, he captured the depravity of the eighties with one of contemporary literature's most polarizing characters, American Psycho's iconic, terrifying Patrick Bateman, and received plentiful death threats in the bargain. In recent years, his candor and gallows humor on both Twitter and his podcast have continued his legacy as someone determined to speak the truth, however painful it might be, and whom people accordingly either love or love to hate. He encounters various positions and voices controversial opinions, more often than not fighting the status quo. Now, in White, with the same originality displayed in his fiction, Ellis pours himself out onto the page and, in doing so, eviscerates the perceived good that the social media age has wrought, starting with the dangerous cult of likeability. White is both a denunciation of censorship, particularly the self-inflicted sort committed in hopes of being 'accepted', and a bracing view of a life devoted to authenticity. Provocative, incisive, funny, and surprisingly poignant, White reveals not only what is visible on the glittering, pristine surface but also the riotous truths that are hidden underneath. Bret Easton Ellis's first work of non-fiction is an incendiary polemic about what is going on in the world right now -guaranteed to entertain, surprise and provoke. Shipping may be from multiple locations in the US or from the UK, depending on stock availability. N° de réf. du vendeur 9781529012392