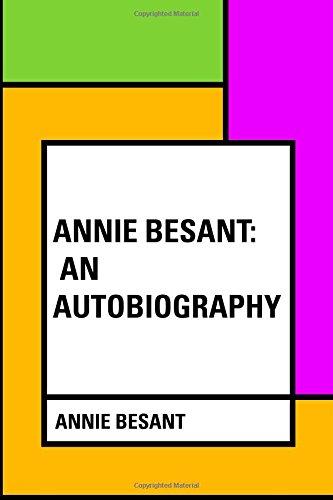 Annie Besant was a well-known women's right advocate in Britain during the 19th century. From the preface:  "IN addition to the large number of volumes which stand in the name of Annie Besant in the catalogue of the British Museum, there is a great quantity of litera­ture, for which she is responsible, that has appeared in more fugitive form as articles, pamphlets and published lectures, issued not only in Great Britian but in America, India and Australia. Much of this work is of great interest, but is quite out of reach of the general reader as it is no longer in print, and inquiries for many such items have frequently to be answered in the negative. Under these circumstances the T.P.S. decided to issue an edition of Mrs. Besant's collected writings under the title Essays and Addresses. It was originally intended to arrange the matter in chronological order, commencing with the writer's first introduction to Theosophy as reviewer of Mme. Blavatsky's Secret Doctrine, but several considerations determined the abandonment of this plan in favour of the scheme now adopted, which is the classification of subject-matter independent of chronological order. The Publishers feel sure that this arrangement will especially commend itself to students who desire to know what the Author has written on various important aspects of Theosophy in its several ramifications, and for all purposes of study and reference the plan chosen should more effectively serve. The dates and sources of articles are given in nearly all cases, and they are printed without any revision beyond the correction of obvious typographical errors.