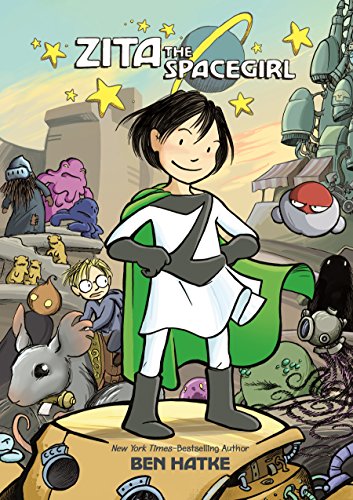 When Zita's best friend disappears in a puff of smoke, she doesn't even think before dashing after him. To her surprise, she finds herself on a planet she's never seen before. Alien chickens and insecure robots are weird enough as new experiences go, but Zita is more shocked to find herself cast in the role of an intergalactic hero. It looks like there's nothing for her to do but don a cape and officially become: Zita the Spacegirl!

For no reason at all, a little red button crashes to earth while Zita and her pal Joseph are out cavorting around. Of course, no one could resist pushing a mystery button, which pops open an interdimensional portal that whisks Joseph away. Zita follows and lands on a delightfully bizarre alien planet, where she sees Joseph being captured by a tentacled, scuba-headed creature. She makes some allies, takes off after him, and zany mishaps and dashing adventures ensue. Any story in which one can escape prison with a tube of "doorpaste" (just like toothpaste, except that it makes magic doors appear when smeared on a wall) obviously puts more stock in wowing imaginations than satisfying logic, and it needs solid cartooning chops to back it up. Fortunately, Hatke's got them, and he doles out an increasingly loony and charming array of aliens, robots, and unclassifiable blobs and hairy things for Zita (herself a cross between Ramona Quimby and a Matt Phelan waif) to encounter. It's fun, plenty funny, and more than a little random. Kids will love it. --Booklist

Zita's life took a cosmic left turn in the blink of an eye. When her best friend is abducted by an alien doomsday cult, Zita leaps to the rescue and finds herself a stranger on a strange planet. Humanoid chickens and neurotic robots are shocking enough as new experiences go, but Zita is even more surprised to find herself taking on the role of intergalactic hero. Before long, aliens in all shapes and sizes don't even phase her. Neither do ancient prophecies, doomed planets, or even a friendly con man who takes a mysterious interest in Zita's quest. Zita the Spacegirl is a fun, captivating tale of friendship and redemption from Flight veteran Ben Hatke. It also has more whimsical, eye-catching, Miyazaki-esque monsters than you can shake a stick at.

3. Zita the Spacegirl (Paperback or Softback)

Description du livre Paperback. Etat : New. Paperback. Zita's life took a cosmic left turn in the blink of an eye.When her best friend is abducted by an alien doomsday cult, Zita leaps to the rescue and finds herself a stranger on a stran.Shipping may be from multiple locations in the US or from the UK, depending on stock availability. 192 pages. 0.380. N° de réf. du vendeur 9781596434462