The Theory of Moral Sentiments 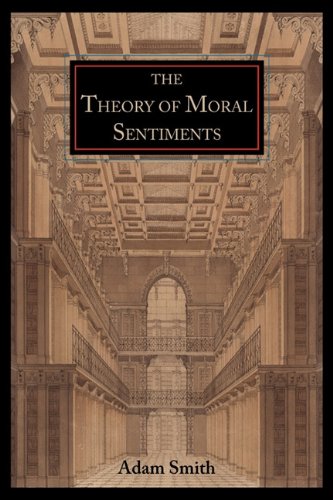 To truly understand Adam Smith's economic masterpiece "The Wealth of Nations", one must understand its moral foundation. Without Smith's essential prequel, "The Theory of Moral Sentiments", the more famous "Wealth of Nations" can easily be misunderstood, twisted, or dismissed. Smith rightly lays the premise of his economics in a seedbed of moral philosophy -- the rights and wrongs, the whys and why-nots of human conduct. Smith's capitalism is far from a callous, insensitive, greed-motivated, love-of-profits-at-any-cost approach to the marketplace, when seen in the context of his "Moral Sentiments." Smith's first section deals with the "Propriety of Action". The very first chapter of the book is entitled "Of Sympathy". This is very telling of Smith's view of life, and his approach to how men should conduct their lives. This propriety of conduct undergirds all social, political and economic activities, private and public. Smith treats the passions of men with clinical precision, identifying a gamut of passions like selfishness, ambition and the distinction of ranks, vanity, intimidation, drawing examples from history and various schools of philosophy. He extols such quiet virtues as politeness, modesty and plainness, probity and prudence, generosity and frankness -- certainly not the qualities of the stereotypical cartoon of a capitalist robber-baron.

Adam Smith (1723-1790) was a Scottish social philosopher and a pioneer of political economy. One of the key figures of the Scottish Enlightenment, Smith is the author of The Theory of Moral Sentiments and An Inquiry into the Nature and Causes of the Wealth of Nations. The latter, usually abbreviated as The Wealth of Nations, is considered his magnum opus and the first modern work of economics. It earned him an enormous reputation and would become one of the most influential works on economics ever published. Smith is widely cited as the father of modern economics and capitalism. Smith studied social philosophy at the University of Glasgow and the University of Oxford. After graduating, he delivered a successful series of public lectures at Edinburgh, leading him to collaborate with David Hume during the Scottish Enlightenment. Smith obtained a professorship at Glasgow teaching moral philosophy, and during this time he wrote and published The Theory of Moral Sentiments. In his later life, he took a tutoring position that allowed him to travel throughout Europe, where he met other intellectual leaders of his day. Smith returned home and spent the next ten years writing The Wealth of Nations, publishing it in 1776. He died in 1790.

1. The Theory of Moral Sentiments