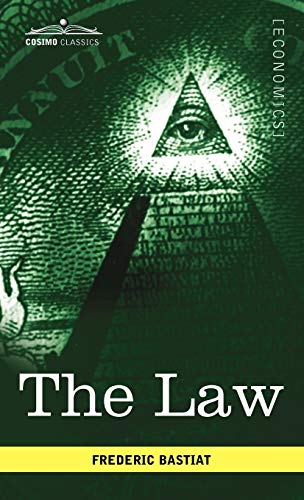 The Law was originally published in French in 1850 by Frederic Bastiat. It was written two years after the third French Revolution of 1848. From Wikipedia: Claude Frédéric Bastiat (29 June 1801 – 24 December 1850) was a French classical liberal theorist, political economist, and member of the French assembly. He was notable for developing the important economic concept of opportunity cost. Bastiat was born in Bayonne, Aquitaine, France. When he was nine years old, he was orphaned and became a ward of his paternal grandparents. At 17, he left school to work in his family's export business. Economist Thomas DiLorenzo suggests that this experience was crucial to Bastiat's later work since it allowed young Frédéric to acquire first-hand knowledge of how regulation can affect markets. Sheldon Richman notes that "he came of age during the Napoleonic wars, with their extensive government intervention in economic affairs." When Bastiat was 25, his grandfather died, leaving the young man the family estate, thereby providing him with the means to further his theoretical inquiries. Bastiat developed intellectual interests in several areas including philosophy, history, politics, religion, travel, poetry, political economy and biography. After the middle-class Revolution of 1830, Bastiat became politically active and was elected justice of the peace in 1831 and to the Council General (county-level assembly) in 1832. He was elected to the national legislative assembly after the French Revolution of 1848. His public career as an economist began only in 1844. It was cut short by his untimely death in 1850. Bastiat had contracted tuberculosis, probably during his tours throughout France to promote his ideas, and that illness eventually prevented him from making further speeches (particularly at the legislative assembly to which he was elected in 1848 and 1849) and took his life. Bastiat died in Rome on 24 December 1850. Bastiat was the author of many works on economics and political economy, generally characterized by their clear organization, forceful argumentation, and acerbic wit. Economist Murray Rothbard wrote that "Bastiat was indeed a lucid and superb writer, whose brilliant and witty essays and fables to this day are remarkable and devastating demolitions of protectionism and of all forms of government subsidy and control. He was a truly scintillating advocate of an untrammeled free market." On the other hand, Bastiat himself declared that subsidy should be available, but limited: "under extraordinary circumstances, for urgent cases, the State should set aside some resources to assist certain unfortunate people, to help them adjust to changing conditions." Among his better known works is Economic Sophisms, which contains many strongly worded attacks on statist policies. Bastiat wrote it while living in England to advise the shapers of the French Republic on pitfalls to avoid. Contained within Economic Sophisms is the famous satirical parable known as the "Candlemakers' petition" which presents itself as a demand from the candlemakers' guild to the French government, asking the government to block out the Sun to prevent its unfair competition with their products. He also facetiously "advocated" forbidding the usage of everyone's right hand, based on the assumptions that more difficulty means more work and more work means more wealth. Much like Jonathan Swift's A Modest Proposal or Benjamin Franklin's anti-slavery works, Bastiat's argument cleverly highlights basic flaws in protectionism by demonstrating its absurdity through logical extremes. Bastiat's most famous work, however, is undoubtedly THE LAW, originally published as a pamphlet in 1850. It defines, through development, a just system of laws and then demonstrates how such law facilitates a free society. He also famously engaged in a debate, between 1849 and 1850, with Pierre-Joseph Proudhon about the legitimacy of interest.

The Law, original French title La Loi, is an 1850 book by Frederic Bastiat. It was written at Mugron two years after the third French Revolution and a few months before his death of tuberculosis at age 49. The essay was influenced by John Locke's Second Treatise on Government and in turn influenced Henry Hazlitt's Economics in One Lesson. It is the work for which Bastiat is most famous along with The candlemaker's petition and the Parable of the broken window. In The Law, Bastiat says "each of us has a natural right – from God – to defend his person, his liberty, and his property". The State is a "substitution of a common force for individual forces" to defend this right. The law becomes perverted when it is used to violate the rights of the individual, when it punishes one's right to defend himself against a collective effort of others to legislatively enact laws which basically have the same effect of plundering. Justice has precise limits but philanthropy is limitless and government can grow endlessly when that becomes its function. The resulting statism is "based on this triple hypothesis: the total inertness of mankind, the omnipotence of the law, and the infallibility of the legislator". The relationship between the public and the legislator becomes "like the clay to the potter". Bastiat says, "I do not dispute their right to invent social combinations, to advertise them, to advocate them, and to try them upon themselves, at their own expense and risk. But I do dispute their right to impose these plans upon us by law – by force – and to compel us to pay for them with our taxes".

Frederic Bastiat ( 29 June 1801 – 24 December 1850) was a French economist and author who was a prominent member of the French Liberal School. He developed the economic concept of opportunity cost, and introduced the Parable of the Broken Window. He was also a Freemason, and member of the French National Assembly.
As a strong advocate of classical liberalism and the economics of Adam Smith, his views favouring free trade and opposing protectionism provided a basis for libertarian capitalism and the Austrian School.

1. The Law (Hardback or Cased Book)