Pride and Prejudice and Zombies

Pride and Prejudice and Zombies 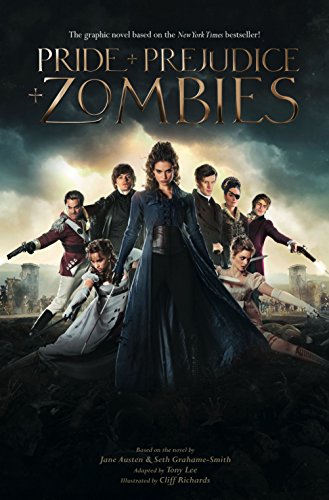 ------The moment, Monster-lit mash-ups. 'Its a truth universally acknowledged that a zombie in possession of brains must be in want of more brains. Never was this truth more plain than during the recent attacks at Netherfield Park, in which a household of eighteen was slaughtered and consumed by a horde of the living dead.' So begins Pride and Prejudice and Zombies by Los Angeles screenwriter Seth Grahame-Smith, in which Jane Austen's Regency prose is drenched in human gore and spiked with Shaolin ninja moves...Scholars think it's a bloody travesty, and the fans agree - the bloodier the better. --The Times magazine, April 18, 2009----The new trend for adding a touch of blood and gore to the genteel world inhabited by the likes of Elizabeth Bennett and the Dashwood sisters is set to reach grisly new heights next month with the publication of a series of books which will indulge the public's apparently insatiable thirst for horror "mash-up" literature. ...Two weeks later, the US-based creators of the best-selling publishing phenomenon Pride and Prejudice and Zombies are due to unleash their follow-up, which brings a bit of aquatic horror to Austen's debut with Sense and Sensibility and Sea Monsters. ... Pride and Prejudice and Zombies has sold over 700,000 copies and is to be made into a film' Name the best science fiction titles.Speculative fiction has produced some of the most intriguing story titles ever. But which are the best of the best? You should never judge a book by its cover, but should you judge a story by its title? If the recent success of Pride and Prejudice and Zombies is anything to go by, then for many readers today the answer is yes. Seth Grahame-Smith's bestselling mash-up of Jane Austen and George A Romero became one of the most pre-ordered titles this side of The Lost Symbol, based solely on a zeitgeist-surfing title. And if those readers came to the story expecting an obvious joke stretched thin over 316 pages too many, they were not disappointed. -- --The Guardian, 20 November 2009

A quirky twist. Wannabe novelists looking for a marketable idea can settle on an already successful literary classic that is a surefire seller, add a twist and put it out there all over again. That appears to be the way forward for some, including a version of 'Pride and Prejudice', published by Quirk Books in which the original text is enhanced with new scenes of zombies, by Seth Grahame-Smith--The Independent, November, 2009--There's a whole new genre of Jane Austen works. While most adaptations pride themselves on loyally adhering to the original, a recent version of Austen's most famous novel by writer Seth Grahame-Smith has introduced a new element. His book is entitled Pride and Prejudice and Zombies, and is an example of the increasingly popular 'mash-up' genre. Grahame-Smith's interpretation sees a household of 18 people slaughtered and consumed by the living dead, and endows the Bennet sisters with martial arts skills to keep the creatures off their crinolines. 'I tried to space through the book sequences of gratuitous gore, so it would be more breezy than the original,' said Grahame-Smith-- You should read this if you have any interest at all in the old classics, a fantastic idea to do this! --rottingzombie, April, 2013

Pride and Prejudice and Zombies uses some clever genre plot devices to spice up the original novel, including the Bennett sisters substituting reading and playing music for sparring with martial arts experts in the far east and becoming trained assassins, with the sole purpose of defeating the zombie army waiting to attack-- --Eatmy Brains dot com, Nov, 2009 --Eatmy Brains dot com, Nov, 2009

The contrast between the civilised polite society of 19th centuary England and the gory action scenes is bound to make you wince and laugh at the same time...Zombies with a classic twist but don't expect these to appear in English lit --Flipside magazine, May, 2013

"It is a truth universally acknowledged that a zombie in possession of brains must be in want of more brains." So begins Pride and Prejudice and Zombies-- Austen's classic fiendishly mashed-up with scenes of zombie mayhem. This graphic novel adaptation of the New York Times bestseller and major pop culture phenomenon, featuring original art, will bring this sensational tale to a whole new audience.

1. Pride and Prejudice and Zombies (Paperback)

2. Pride and Prejudice and Zombies

3. Pride and Prejudice and Zombies (Paperback)

5. Pride And Prejudice And Zombies