Dewey and Other Naval Commanders: Illustrated 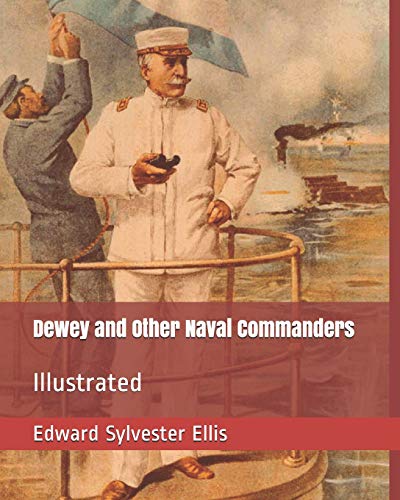 Description du livre Independently Published, United States, 2019. Paperback. Etat : New. Language: English. Brand new Book. George Dewey (December 26, 1837 - January 16, 1917) was Admiral of the Navy, the only person in United States history to have attained the rank. He is best known for his victory at the Battle of Manila Bay during the Spanish-American War.Born in Montpelier, Vermont, Dewey entered the United States Naval Academy in 1854. He graduated from the academy in 1858 and was assigned as the executive lieutenant of the USS Mississippi at the beginning of the Civil War. He participated in the capture of New Orleans and the Siege of Port Hudson, helping the Union take control of the Mississippi River. By the end of the war, Dewey reached the rank of lieutenant commander.Edward Sylvester Ellis (April 11, 1840 - June 20, 1916) was an American author who was born in Ohio and died at Cliff Island, Maine.Ellis was a teacher, school administrator, journalist, and the author of hundreds of books and magazine articles that he produced by his name and by a number of noms de plume. Notable fiction stories by Ellis include The Steam Man of the Prairies and Seth Jones, or the Captives of the Frontier.Internationally, Edward S. Ellis is probably known best for his Deerfoot novels read widely by young boys until the 1950s.Dime novelsSeth Jones was the most significant of early dime novels of publishers Beadle and Adams. It is said that Seth Jones was one of Abraham Lincoln's favorite stories. During the mid-1880s, after a fiction-writing career of some thirty years, Ellis eventually began composing more serious works of biography, history, and persuasive writing. Of note was "The Life of Colonel David Crockett," which had the story of Davy Crockett giving a speech usually called "Not Yours To Give." It was a speech in opposition to awarding money to a Navy widow on the grounds that Congress had no Constitutional mandate to give charity. It was said to have been inspired by Crockett's meeting with a Horatio Bunce, a much quoted man in Libertarian circles, but one for whom historical evidence is non-existent.PseudonymsBesides the one hundred fifty-nine books published by his own name, Ellis' work was published under various pseudonyms, including: "James Fenimore Cooper Adams" or "Captain Bruin Adams" (68 titles)"Boynton M. Belknap" (9 titles)"J. G. Bethune" (1 title)"Captain Latham C. Carleton" (2 titles)"Frank Faulkner" (1 title)"Capt. R. M. Hawthorne" (4 titles)"Lieut. Ned Hunter" (5 titles)"Lieut. R. H. Jayne" (at least 2 titles in the War Whoop series)[8]"Charles E. Lasalle" (16 titles)"H. R. Millbank" (3 titles)"Billex Muller" (3 titles)"Lieut. J. H. Randolph" (8 titles)"Emerson Rodman" (10 titles)"E. A. St. Mox" (2 titles)"Seelin Robins" (19 titles)He was a major author during the era of inexpensive fiction of the nineteenth century (dime novels). Because he wrote under dozens of pseudonyms, as well as under his own name, it is virtually impossible to know exactly how many books he wrote, but it is believed to be in the hundreds. Notable works include: The Lost Trail (1884), The Land of Mystery (1889), Through Forest and Fire (1891), Two Boys in Wyoming (1898), Thomas Jefferson (1898/1903), The Jungle Fugitives (1903) and Oonomoo: The Huron (1911). N° de réf. du vendeur APC9781798531068

2. Dewey and Other Naval Commanders: Illustrated

3. Dewey and Other Naval Commanders: Illustrated

4. Dewey and Other Naval Commanders: Illustrated