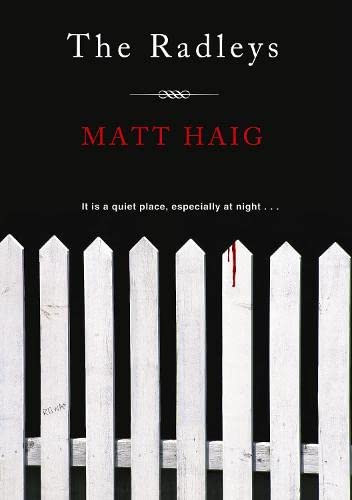 "Dripping in blood, this is a story of family secrets so terrible that they shouldn't be uncovered." (Guardian)

"Red-blooded fiction at its most seductive." (Sunday Telegraph)

"Delightfully eccentric . . . a strangely moving portrait of a marriage." (The Financial Times)

A sharp, bloody tale of abstinence and indulgence (and

trying not to eat the neighbours).

"A witty and humane story about a family of vampires living in respectable English suburbia." (Daily Mail)

"Haig's very original spin on the [vampire] myth is insightful, frightening and uplifting." (The Guardian)

"Smart, snappy, quirky . . . as much a satire on self-denying suburban life as a straightforward bloodthirsty tale." (Scotsman)

"Ratchets up the pace and the tension until the taut conclusion. Bloody good fun." (SFX Magazine)

"Switches deftly between a classic Carrie-style narrative of teen difference, in which the kids are teased for their outsiderness, and a parental tale of mid-life crisis." (Herald)

"Great fun, with much enjoyment derived from the placing of these ancient bloodsuckers in dull English suburbia." (Vogue)

"Haig writes in addictive, bitesize chapters that pump the action along... All vampire fiction has a strong sexual element, but in this book, the passion's not just for the pale-faced teens." (Daily Mail)

"Haig has managed to coax something delightfully new and, unusually, rather English from a saturated genre... [He] combines strong dialogue with a healthy sense of self-parody in a novel that should appeal to all vampire fans, whatever their age." (Metro)

"vampire fans will find lots to enjoy, but it's the blackly comic dissection of the family that makes this book stand out." (The Guardian)

"Witty as well as deep." (Books for Keeps)

"The 'some adult content' coverline gives due warning that teen readers might be bored by adults holding dinner parties and contemplating affaris, but the story should carry them through such longueurs." (Books for Keeps)

"Shot through with wry humour, Haig's lively family saga, replete with sexual frissons and distinctly subversive undercurrents, is carried off with aplomb" (Guardian) --The Financial Times

Matt Haig was born in 1975. His debut novel, The Last Family in England, was a UK bestseller. The Dead Fathers Club, an update of Hamlet featuring an eleven-year-old boy, and The Possession of Mr Cave, a horror story about an overprotective father, are being made into films and have been translated into numerous languages. He is also the author of the award winning children's novel Shadow Forest, and its sequel, The Runaway Troll. A film of The Radleys is in production with Alfonso Cuaron.

Matt has lived in London and Spain, and now lives in York with the writer Andrea Semple and their two children.